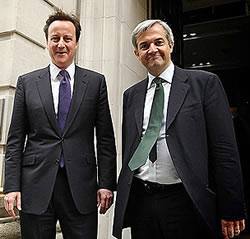 In an interview about new nuclear power stations on the Today programme this morning, Energy Secretary Chris Huhne said the coalition was fully behind the construction of new nuclear plants by 2018 and said “my views on nuclear power have always been much misunderstood.”

“When you are in a hole, stop digging. Every citizen is already paying over £1,500 to clean up the waste of the current generation of nuclear power stations…

“If we had known about the dangers and costs of nuclear energy 50 years ago, it is doubtful we would have ever committed to this expensive mistake.” (31st July 2006)

“Nuclear power will impose a tax on the country, costing consumers billions of pounds, distorting the market and squeezing out competition.” (21st June 2006)

Indeed, only a few months ago – in March this year – then Lib Dem energy spokesman, now deputy leader of the party, Simon Hughes, said Conservative policy on nuclear power was “confused, incoherent and lacking in credibility”, adding “we’re no closer to finding out how to deal with highly toxic nuclear waste”; he also called plans for new nuclear “a reckless mistake”.

In that article for The Guardian, Hughes said:

“Both Labour and the Tories claim that they will not provide any public subsidy, but both know that this cannot be true when the nuclear industry that has never been able to survive without it.” (22nd March 2010)

However, just today energy secretary Chris Huhne seemed to say precisely the same thing as Labour and the Tories:

“We are on course to make sure that the first new nuclear power station opens on time in 2018.”

But he ruled out subsidies and said:

“I don’t think you can determine whether a government is serious about energy policy merely in terms of whether it is prepared to write very large cheques.”

There seems to be a similar muddle going on about the coalition’s planning policy. On Wednesday the Financial Times reported that an unlikely alliance of industry groups, property associations, engineering bodies and environmental campaigners had come together to attack the coalition’s policy on planning in a letter they addressed to communities secretary Eric Pickles.

“Bodies ranging from Friends of the Earth and WWF to the Rail Freight Group and the Institution of Civil Engineers have formed an unaccustomed alliance to condemn the dismantling of Labour’s regional planning systems.”

Ann Skippers, president of the Royal Town Planning Institute – who organised the letter – told the FT that the new coalition policy could:

“Hinder solutions to the housing crisis, to tackling climate change, to expanding renewable energy infrastructure and to reversing biodiversity loss.”

In a separate article in today’s Financial Times, the CBI have piled in behind these other groups, warning that the chance of securing £150bn of private sector investment in low-carbon infrastructure is receding because of the coalition’s failure to provide clarity on planning policy.

The paper reports that the CBI is also complaining about delays in announcements on Carbon Capture and Storage (CCS) and uncertainty on energy market reform.