GDP growth has been downgraded by the Bank of England partly due to the Coalition's cuts. But growth in 2009-10 was at the top range of estimates set out last year. 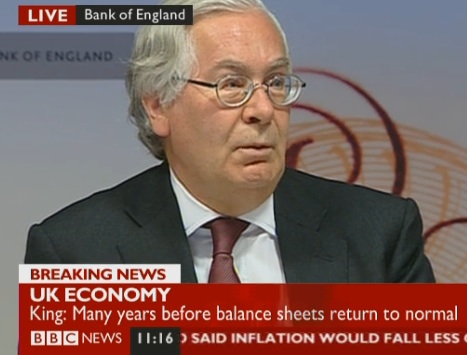 GDP growth has been downgraded by the Bank of England – in part due to the Coalition’s largely avoidable cuts programme. By contrast, growth over the final year of Labour’s term in office grew at the top range of estimates set out in May 2009.

Bank of England Governor, Mervyn King, today downgraded GDP growth for 2011 to 2.5 per cent. The Bank had predicted growth would grow close to 3.5 per cent through 2011-12. The reasoning is explained in the Bank’s Inflation Report:

“The considerable stimulus from monetary policy, together with a further expansion in world demand and the past depreciation of sterling, should sustain the recovery. But the strength of growth is likely to be tempered by the continuing fiscal consolidation and the persistence of tight credit conditions…

“The Committee judges that the recovery is likely to continue. The most likely outcome for GDP growth is lower than in the May Report, reflecting the softening in business and consumer confidence, the faster pace of fiscal consolidation and a slower improvement in credit conditions. But the downside risks around this central projection are judged to be smaller than in May, due in part to the fiscal measures announced in the June Budget reducing the chances of a sharp rise in long-term interest rates.”

So while the June Budget has – in the Bank’s view – reduced some downside risks of rising interest rates, the Coalition’s largely avoidable cuts programme has reduced the ability of the economy to ease the deficit through growth.

The Bank does not make projections about the likelihood of a technical double dip recession and although the prospect of this taking place is still small, there is little doubt that the rapid growth of 1.1 per cent in the last quarter won’t be sustained. The report states:

“GDP growth is likely to slow in Q3. In part, that is because Q2 growth was erratically strong. But there are also signs that underlying growth may be weakening. Business confidence has fallen across a range of surveys and the CIPS/Markit business activity indices fell back across all sectors in July.”

By contrast to the cut in growth forecasts, Mervyn King pointed out in the Q&A session that the economy had performed at the top end of expectations in 2009-10. This chart outlines the economy’s growth performance against expectations in Labour’s final year in office.