David Cameron has announced a war on 'welfare cheats'. But the £5.1bn welfare gap - only £1.5bn of which is cheating - is dwarfed by the £40bn tax gap. 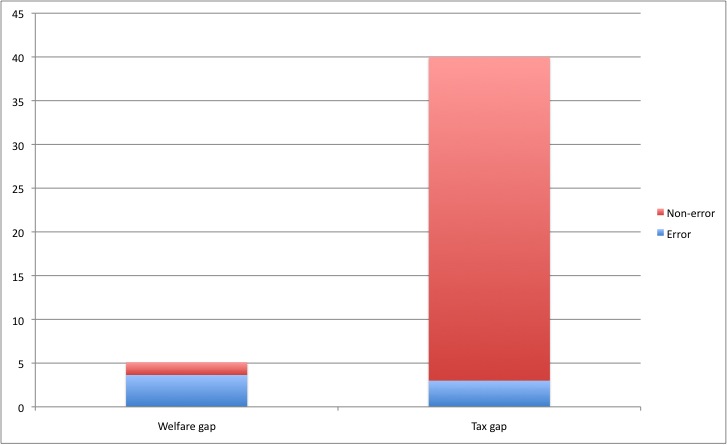 David Cameron’s Sunday Times article yesterday signalled a “war on welfare cheats”. But the Coalition is silent on the larger problem of tax cheats and HM Revenue and Customs (HMRC) have announced that they will no longer produce some of their key stats on enforcement.

David Cameron yesterday described welfare and tax credit overpayments as the “one area of ingrained waste that outranks all others”. He wrote:

“Simply shrugging our shoulders at benefit fraud is a luxury we can no longer afford – which is why Iain Duncan Smith is working on the radical steps we can take to deal with it.”

But as the Guardian reports today:

Meanwhile, before the election in March, HM Revenue and Customs updated its ‘Measuring tax gaps 2009‘ report and outlined that, “The size of the UK tax gap is estimated to be around £40 billion in 2007-08.” The tax gap is “the difference between tax collected and that, which in HMRC’s view, should be collected.” Only £3 billion is attributed to error with £5 billion due to criminal attacks, £7 billion due to tax evasion and a further £7 billion due to tax avoidance.

Chart: The welfare and tax gaps including proportion due to systemic error

The gap includes £11.5 billion from VAT, £8.9 billion from corporation tax including £3.1 through “avoidance by Very Large Businesses”, and £7.2 billion from inaccurate self-assessment returns from individuals. Accountant and blogger, Richard Murphy, estimates that the gap is closer to £120 billion.

During the general election, the Liberal Democrats set out plans to raise £4.6 billion from “anti-avoidance measures”. But the Coalition has been largely silent since. In the Budget, George Osborne’s only mention of “tax avoidance” came in a reference to the coalition’s decision to raise capital gains tax while the Budget red book made only the vaguest of noises:

“The Government is committed to tackling tax avoidance and intends to develop strategic responses to address long-standing avoidance risks.”

As reported in the Observer yesterday, HMRC have – since May – stopped publishing information on “the number of prosecutions against taxpayers and the success rate of court actions pursued by HMRC”.