The bonfire of the quangos is in full swing, and the Government has started to throw green wood onto the rising flames. 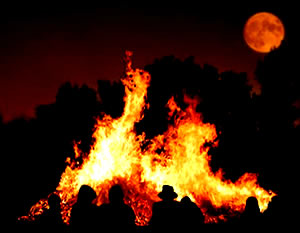 The bonfire of the quangos is in full swing, and the Government has started to throw green wood onto the rising flames. Last Thursday, to barely a whisper in the press, not one but two environmental bodies were axed: the Sustainable Development Commission (SDC), and the Royal Commission on Environmental Pollution (RCEP). No mere kindling, these pair: the SDC has existed for 10 years, whilst the RCEP was established by Ted Heath back in 1970. These branches of government have now been sacrificed in the name of cost-savings.

Those few who spotted the announcement reacted with shock and exclamation. Green MP Caroline Lucas branded the move an “absolute disaster”. George Monbiot called it “irrational and counter-productive”. Jonathan Porritt, former chair of the SDC, bitterly lamented its axing as being “dogma-driven and brazenly cynical”.

But the demise of the SDC is in many ways no surprise. One need only consult the auguries – that is to say, the small-statist think tanks whose position papers have prefigured much of the Coalition’s programme of spending cuts.

Ample warning of the threat to the SDC was given in a paper jointly authored by the TaxPayers’ Alliance and the Institute of Directors last October, as I highlighted in a blog post at the time. Their report recommended, amongst other things, the SDC’s abolition, castigating it for being:

“A Government-sponsored campaign for an increase in green and environmentally aware policy. It is not an expert advisor but a political campaign, and whatever its merits may be, such campaigns should not be paid for through public funds.”

This same stance was reiterated again by the TPA earlier this year in a wish-list of quangos to cut after the General Election; whilst at the time appearing to be just kite-flying on the part of the Taxpayers’ Alliance, their words have clearly been heeded.

This has not been the only time the TaxPayers’ Alliance has agitated against green bodies. Responding to suggestions for the creation of new green regulatory bodies in the Conservative Party’s Quality of Life Review back in 2007, the TPA fumed:

“These quangos are unlikely to come cheap and some, like the Climate Change Committee, place policy decisions in the hands of unelected and unaccountable bureaucrats.”

Of course, this was – and is – utter nonsense: the Committee on Climate Change, as it has since been constituted, makes no decisions, but simply – and effectively – scrutinises policy and makes recommendations. Not that the Government necessarily heeds good advice. The committee’s latest report, published last week, warned that current levels of UK spending on low-carbon innovation “should be regarded as a minimum, and cuts would be detrimental to the achievement of our climate goals” – just as the Coalition revealed it was cutting £34m from low-carbon investment.

A similar lack of understanding of the functions of environmental regulators pervades any discussion of them by rightwing pundits. Dennis Sewell, writing in the Spectator last autumn, called on David Cameron to slash the number of environmental public bodies:

“If we have an Environment Agency, why do we also need an Energy Savings Trust, environmental campaigns, Environwise [sic] and an Air Quality Standards?”

It seemed not to matter to Sewell that they do entirely different things.

In fact, the UK’s total spending on bodies to regulate and enforce environmental protection is tiny, as I calculated last year. Axing the SDC and RCEP will save the taxpayer barely £5 million; and only half the SDC’s funding comes from Westminster, with the rest being funded by the Welsh and Scottish governments. The ultimate irony is that energy efficiency measures promoted and regulated by the SDC save the Government about £60-70 million annually. As George Monbiot writes, cutting the SDC will cost the state more money in the long term.

But going beyond the cost-cutting rhetoric that is de rigeur, what about assigning value to the central tasks these bodies actually performed? On two counts, the merits of the SDC and RCEP ought to have seen them remain.

Firstly, both bodies held a mandate to examine a broad, complex and essential policy area, sustainable development. It appears the Government fails to understand what this term encompasses beyond climate change. Who now takes on responsibility for ensuring joined-up Government when considering biodiversity loss, resource use, oil depletion, GM crops, or any of the huge host of issues that the SDC and RCEP worked on?

Defra’s Secretary of State Caroline Spelman claims that “times have changed since many of these bodies were set up, and much of what they do is now everyday Government business”. Times have indeed changed; since the SDC was founded, we have moved still further into ecological debt as a nation; yet Government business remains focused on accounting for merely fiscal debt.

Secondly, and more worryingly still, is the Coalition’s disdain for the watchdog role these bodies performed within Government. The SDC was set up under Tony Blair’s first administration (and prefigured by a similar body under the Major government) in an acknowledgement that scrutiny makes for better decision-making and balanced government.

Certainly, it riled civil servants in the main Whitehall departments, who saw it as a thorn in their side. But that, after all, was its purpose. Now, in a frenzy of slash-and-burn, Westminster has rid itself of one of its overseers.

17 Responses to “Sustainable development? So far, it’s mostly been slash-and-burn”