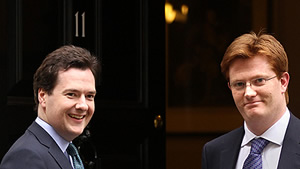 The Scottish Government’s Chief Economic Adviser, Andrew Goudie, has warned that following the UK government’s emergency budget, the funding squeeze facing Scotland is now much larger than was previously thought. In April, Dr Goudie reported that Scottish expenditure would be expected to fall by £25-35 billion in real terms by 2024/25, as well as warning that spending would be likely to face five consecutive years of real-term cuts, with a further two years needed before growth returns to an upward trend.

• It could take until 2025/26 for the Scottish budget to return to 2009/10 levels, an adjustment period three years longer than implied by the assumptions in Alistair Darling’s budget in March.

• The cumulative loss, compared to a scenario where the Scottish Government Budget was assumed to remain at its 2009/10 level in real terms, is estimated to be approximately £42 billion. This compares to a cumulative loss of £26 billion under the assumptions in the March 2010 UK Budget.

Responding to the news, finance secretary John Swinney made clear:

“This backs up our view that the new Government is cutting too deeply and too quickly.”

The news came after the Royal College of Nursing issued a series of warnings over potential job losses to nursing posts across the devolved nations. In Wales, the RCN warned that over the next three years, 2,000 nursing posts could be axed as a result of the cutbacks to come.

Responding to the news, Tina Donnelly, director of RCN Wales, called for greater efforts to be made to cut back on management costs to protect frontline staff:

“We are realistic about the need to make efficiency savings in the NHS. However, spending an excess of £34m on managers is extravagant and unaffordable. It is essential that we protect patient safety by protecting frontline services rather than just imposing cuts. We are challenging all local health boards in Wales to consider the impact on patient care of these potential job losses.”

Speaking ahead of a Government away day, he said:

“I think it’s political. The DUP, before the Assembly elections, said the health budget should rise 20 per cent. Immediately they get elected and I’m the minister, they’re arguing there should be no rises. We have members, for example also in Sinn Fein, who vote for those cuts and then go and protest against the cuts when the cuts come along.”

Meanwhile, across Scotland, the RCN warned that cuts worth £250 million would be needed for NHS Scotland to break even this year. Responding, Norman Provan, Unison’s director in Scotland, commented:

“We are in no doubt that politicians genuinely want to protect frontline services and the vital care those working on the front line deliver to patients. However, there appears to be a gulf between rhetoric and reality when it comes to making savings.”