Today's Public Sector Pensions Commission report is based on the politics of envy and a standard accounting trick to get some scary numbers. 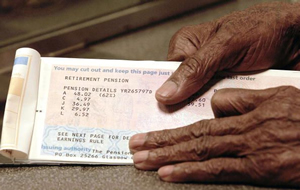 Today’s report from the not-at-all independent Public Sector Pensions Commission is a no more than a repeat of the standard attacks on public sector pensions made by the usual suspects from right-wing think-tanks and the Institute of Directors.

These now have a standard form. First they stir up the politics of pensions envy by comparing the public and private sectors. They then complete the pincer with some scary numbers that suggest the country will shortly bankrupt itself from the burden of paying public sector pensions.

Two out of three private sector workers now get no employer support in building up a pension. Tax payers certainly face a looming bill of paying them means-tested benefits in retirement that will barely lift them out of poverty. Yet who has taken the decisions to strip private sector workers of their pensions? Could it be possibly be the company boards whose members are represented by the Institute of Directors, the main sponsors of this report?

The scary numbers come about because pensions being built up today will still be in payment in up to eight decades time. Small differences in the interest earned by this notional pot make a huge difference to what sum would need to be set aside. Cue the arcane debate about whether the index-rated gilt yield, as the right argue, or AA corporate bonds as the Treasury actually use is the best way to do this.

Of course this is not how public sector pensions are funded. It is therefore a pretty pointless argument. Yet putting slightly different interest rates (known as the discount rate in such exercises) into pensions formulas is the starting point for all the exciting stories about the cost of public sector pensions running out of control – the latest of which dominate coverage of today’s report. Yet it is not just unions who say that arguing about the discount rate is fruitless.

This is what the National Audit Office say:

“Changes in the discount rate lead to large fluctuations in the size of pension liabilities, but have no effect on projected pension payments. For example, the discount rate increased by 0.7 per cent in the year to 31 March 2009 for the four largest schemes. There were no other changes that year to key financial assumptions underlying liabilities, but the discount rate change alone reduced the total liability across all four schemes (teachers, health, civil service, armed forces) by approximately £73 billion.”

Phew – £73 billion. Scary … but meaningless as nothing changed.

Of course pensions do not come free. They do need to change from time to time.  Unions negotiated changes to all schemes mainly to cope with the real world change of increased longevity under the last government.

In the Budget – in a little-noticed move that breached the promise made to protect accrued benefits and was carried out without consultation – the Chancellor announced that future pension increases would be linked to the CPI rather than the RPI measure of inflation. Unfortunately for the IoD this has had a significant impact on the cost of future pension payments and thus undermines their calculations.

So how should government work out whether pensions are affordable?

In an approach endorsed by the NAO and the Office of Budget Responsibility it works out the estimated costs each year of paying pensions (without taking any account of contributions). It then expresses this cost as a share of GDP. This is a surrogate for the share of tax income as tax will go up and down broadly in line with GDP if rates remain unchanged.

And what do these projections show?

The current cost of paying pay-as-you-go public sector pensions is 1.8 per cent of GDP. It rises to 1.9 per cent, but then falls back to 1.7 per cent by 2050. This is the only part of the Treasury’s projections for the cost of an aging society that does not consistently increase – in sharp contrast to state pensions, social care and the NHS.

And these figures were calculated before the impact of the switch from RPI to CPI was announced.