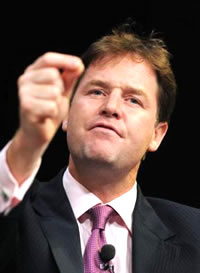 Following Mervyn King’s appearance at the Treasury select committee yesterday, in which he distanced himself from Nick Clegg’s claim that it was only after meeting him he had changed his mind on the deficit, the Liberal Democrat leader now claims that he sold out on deficit reduction before May 6th – despite going into the election committed to a deficit reduction plan closer to Labour than the Conservatives.

In the BBC2 documentary ‘Five days that changed Britain’, to be broadcast tonight at 9:00, he tells BBC political editor Nick Robinson:

“I changed my mind earlier than that [the Coaltion negotiations] … firstly remember between March and the actual general election … a financial earthquake occurred in on our European doorstep.”

When pressed on why he failed to tell the electorate of his conversion, he says:

“… to be fair we were all … reacting to very, very fast-moving economic events.”

“This shows Nick Clegg simply misled voters. He’d clearly decided before the election that David Cameron was his partner of choice.”

On June 6th, Clegg was singing a very different tune in The Observer in an interview with Andrew Ransley, who wrote:

“It is on the economy that the Lib Dems have executed their greatest somersault since the election. Throughout the campaign they castigated the Tories as schoolboy fools for planning immediate spending cuts; now they have fallen in with the plan.

“‘Our view has shifted,’ accepts Clegg. ‘To be fair to us, it shifted because the world around us changed.’ He claims as his alibi ‘the complete belly-up implosion in Greece’, which made it imperative to demonstrate to the markets that the coalition would make an early start on deficit reduction.

“Another influence was ‘a long conversation a day or two after the government was formed’ with Mervyn King, the governor of the Bank of England. ‘He couldn’t have been more emphatic. He said: “If you don’t do this, then because of the deterioration of market conditions it will be even more painful to do it later.’”

Serious questions now need to be asked: if Clegg had changed his mind before the election on spending cuts, why did he not tell the electorate before polling day? The electorate deserved to know what they were voting for and he did not tell them this. His initial position was along the lines of ‘I changed my mind because of what the Governor told me’, King says he told him nothing and now Clegg claims to have made up his mind long before.

Just as with Forgemasters, however, his explanation may be a long time coming, if ever.