Some Muslim pupils are being withdrawn from music lessons on religious grounds; Left Foot Forward assesses why music is singled out in this way, particularly given the increasingly multi-faith and multi-cultural nature of our educational institutions. 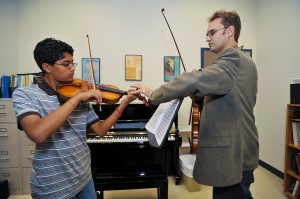 Our guest writer is Tehmina Kazi, director of British Muslims for Secular Democracy

During the last fortnight, various newspapers have reported on a BBC London News investigation which showed that some Muslim pupils were being withdrawn from music lessons. This week, a Daily Mail headline screamed: “Council FORCES schools to re-arrange exams and cancels lessons to avoid offending Muslims during Ramadan” – relating to guidance received by headteachers at Stoke-on-Trent Council in Staffordshire.

The newspaper left it to Councillor Ruth Rosenau to clarify that no-one was being forced to implement anything; this was mere guidance on an issue which leaves many people stumped (some Muslims included).

Unlike sex education and R.E, music is a compulsory part of the National Curriculum. Most of the coverage on the music story quotes Eileen Ross, head of Herbert Morrison Primary School in Lambeth, where almost a third of children come from mainly Somali Muslim families:

“There’s been about 18 or 22 children withdrawn from certain sessions, out of music class, but at the moment I just have one child who is withdrawn continually from the music curriculum…

“It’s not part of their belief, they feel it detracts from their faith.”

It is important to assess why music is singled out in this way, particularly given the increasingly multi-faith and multi-cultural nature of our educational institutions.

The Muslim Council of Britain in turn stated that 10 per cent of Muslims, a small minority, would subscribe to the view that music is haraam (forbidden). While there is a plethora of scholarly opinions on this issue, it is extremely telling that Dr Diana Harris, author of the book Music Education and Muslims, told the BBC:

“Most of them really didn’t know why they were withdrawing their children. The majority of them were doing it because they had just learned that it wasn’t acceptable and one of the sources giving out that feeling was the Imams, particularly Imams who had come over from Pakistan, didn’t really speak English, and felt threatened. I think they were adhering to very strict lines about what was acceptable.”

These parents most probably thought they were doing ‘the right thing’ by removing their children from music lessons, not realising the wider implications for the education of minority communities in Britain.

Dr Harris has conducted research into the issue discussing the lack of Qu’ranic references to music. In a paper for the National Association of Music Educators, “Teaching Music to Muslim pupils: Issues and Considerations for Primary and Secondary Teachers/Trainees,” she states:

“Music itself is not referred to in the Qu’ran.  Some scholars believe that the phrase ‘idle talk’ refers to music but this can only be speculation.”

British Muslims for Secular Democracy, the organisation that I work for, released a guidance booklet in February 2010 for teachers, to help them address cultural and religious issues affecting Muslim pupils. We confirmed the above view that there is no specific Qu’ranic proscription of music, and assert that creativity is considered to be a divine blessing in Islam.

While conservative Muslim scholars prohibit the use of instruments (except basic percussion), there are others who state that as long as the songs in question do not promote obscenity or immorality, music is not outlawed in Islam. Robert Bunting has written a chapter in Maurice Irfan Coles’ 2008 publication, “Every Muslim Child Matters” where music is described as a gateway to creative and critical thinking, to communication, literacy, cultural understanding, global awareness and citizenship, plus a means for young people to communicate with a wider audience.

Let us also not forget the influence of individual cultures on these decisions.  At Dr Harris’ “Music Education for Muslims” Conference in 2002, the Switzerland-based scholar Tariq Ramadan said:

Dr Harris’ own interviews with Muslim parents show that Bangladeshi women in Tower Hamlets were not concerned about music from a religious point of view, but they were afraid of children losing their own culture if they only heard Western music in school.

Imam Zaki Badawi stated in the Society of Muslim Researchers’ 1993 “Proceedings of the Conference on Islam and Music: Much Ado About Music Education” that 90 per cent of people who objected to music in schools had never been inside a school, let alone inside a music class.

This highlights that it is not just educators who need to equip themselves with the skills to teach in a multi-faith environment. Muslim students and their parents also have a responsibility to learn how to adapt to them, and with British schools and teachers under increasing scrutiny, teachers may often be inclined to acquiesce to every cultural or religious demand from pupils’ families.

This however, is not a satisfactory solution, particularly when certain parents do not really know why they are making the demand in question. The Islamic Elementary School of Berlin has grappled with these issues, and director Christa Petersen is often able to ameliorate the concerns of parents – even a father who demanded the withdrawal of instruments from music lessons – without reference to the state.

While practices and beliefs which define groups and individuals are indeed precious, they cannot become the sole basis for educational policies.  This approach seems to be one that will increase resentment in the future. Cultures are continually evolving and schools need to reflect this by being flexible enough to treat all pupils equally. This, in fact, is the real test of commitment to tolerance and understanding.

It is crucial that our children are raised as well-informed individuals with open minds, and it is equally important that they make the effort to adapt to their society and their school environment. The true meaning of multi-culturalism is people living side by side under one shared identity, whilst proudly holding on to their own so that nobody feels resentment or a lack of belonging.

With this vision we can fight back against fringe groups that insist that Muslims and Islam are “incompatible” with Western democracy, and it starts with the education of children. By encouraging all students – including Muslim students – to view each other as equals, we can take steps to correct the disengagement that has been felt by many British Muslims for far too long.

22 Responses to “Much ado about music lessons”