The Miliband brothers are neck-and-neck for top spot in the first round of voting. As many have predicted, the decision will come down to 2nd preferences. 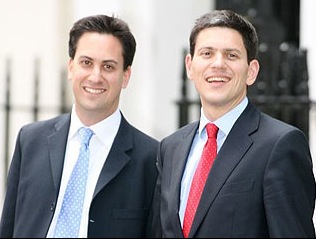 The Miliband brothers are neck-and-neck for top spot in the first round of voting  according to an analysis carried out by Left Foot Forward. Our findings, based on a number of assumptions, find that David Miliband is far from “storming ahead” as today’s Evening Standard claims. If, as predicted by Channel 4’s Gary Gibbon, Ed Miliband is well ahead on second preferences, it seems likely that he will become the next Labour leader.

Paul Waugh’s article today forms an erroneous conclusion from a YouGov poll of the public and of Labour’s 8.5 million voters. Neither of these groups will be balloted in the party’s electoral college which gives a third of votes to MPs and MEPs, a third to members of affiliated trade union members, and a third to Labour’s roughly 200,000 members. Our model looks at each of these blocks in turn. But since it is far from perfect we would welcome comments and advice on how to improve the model over the next two months.

For members of the Parliamentary Labour Party and MEPs, we have used the information about nominations on the Labour party’s website but removed some of the support that Diane Abbott received to get on the ballot paper. Where this support came directly from the David Miliband camp, we have put it back in the David Miliband column. But there are other MPs – for example Rushanara Ali, David Lammy and Fiona Mactaggart – who endorsed Diane Abbott to get her on the ballot paper but who have not yet given a clear and unequivocal indication of which candidate they are likely to support. For this section, we find David Miliband in the lead with 38.9% of support followed by Ed Miliband, (27.9%), Andy Burnham (13.8%), Ed Balls (13.4%), and Diane Abbott (6.1%).

For the membership section of the electoral college, we have used the poll of 652 Labour members carried out last month by Labour List. This poll put David Miliband on 34.9% followed by Ed Miliband (30.8%), Diane Abbott (20.4%), Andy Burnham (9%), and Ed Balls (4.9%). There are a number of problems with this poll which was self-selective and did not include any weighting to ensure it was representative. We suspect that the survey underplays Ed Balls’ and Andy Burnham’s support among members but it is the only survey of Labour members of which we know.

For the trade union section, we make a number assumptions which are very far from certain (but we have to start somewhere). First, we assume there is a premium for a union endorsement which is worth the same as in the 2007 deputy leadership debate. Sunder Katwala writes convincingly on why this may not hold this time – in particular suggesting that a higher turnout may dilute the endorsement effect as it did in 1994. Second, that Unite will end up endorsing Ed Miliband while Unison will end up backing Andy Burnham. These are based on rumours that we’ve picked up in the Westminster village but we will amend the model if these are proved wrong. Third, that the rest of the vote will fall proportionally to votes in the membership section of the electoral college. We might expect Diane Abbott to do better in this section as the candidate furthest to the left while Andy Burnham may benefit from there being a higher proportion of trade union members than Labour members in the north of England. Fourth, we assume that there will be a uniform turnout across all trade unions. We should also mention that we have only projected the votes of the five biggest affiliated trade unions. Our model projects that Ed Miliband is leading the trade union vote with 39.5% followed by David Miliband (26.1%), Diane Abbott (15.2%), Andy Burnham (12.9%) and Ed Balls (6.3%).

Putting all these numbers together the two Miliband brothers are virtually tied on the first round of voting. David has 33.3% while Ed is close behind on 32.8% followed by Diane Abbott (13.9%), Andy Burnham (11.9%), and Ed Balls (8.2%). Less information is known about how the second preferences will work out but if our model is accurate and Gary Gibbon is right to suggest that Ed will do better on second preferences, we’ll stick our necks out and say that the younger brother is in poll position. So I’ve just put my money where my mouth is with £20 on him to win at 12/5 on Sky Bet.

NB: I should make clear that this is neither a political endorsement nor investment advice but reflects a purely professional judgment as to where the value in the current market appears to lie. Left Foot Forward would like to warn readers that the value of your investments can go down as well as up.