The referendum on the alternative vote will be announced next week and held next May, a story the BBC has been leading on today and last night - and a story broken by Left Foot Forward yesterday evening. 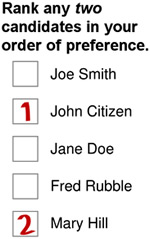 • The referendum on the alternative vote will be announced next week and held next May, a story the BBC has been leading on today and last night – and a story broken by Left Foot Forward yesterday evening.

This afternoon David Cameron, as expected, announced he would be campaigning for a “no” vote in the referendum – putting him at odds with his Coalition partners. The referendum bill – which is by no means a certainty to be passed by Parliament in time for a May poll – will also include proposals to re-draw boundaries to equalise the number of voters in each constituency.

Ben Brogan in the Telegraph, however, suggests the prime minister “secretly wants a ‘yes’ vote”, with Bernard Jenkin, who is leading the 1922 Committee’s charge against AV, saying he found it “astonishing” that his leader was prepared to allow a referendum to take place on the day of the Scottish and Welsh elections.

• This week there was more coverage of the impact of the Government’s cuts, with Left Foot Forward reporting on Monday that the economic forecasts produced by the Office of Budget Responsibility showing claimant unemployment “100,000 higher during 2011-2014” than in their pre-budget analysis.

The row over how many job losses would result from the Budget took centre stage at PMQs on Wednesday, following The Guardian’s front page story of a private Treasury assesment showing the Budget will result in the loss of up to 1.3 million jobs over the next five years. The Guardian revealed that:

Unpublished estimates of the impact of the biggest squeeze on public spending since the second world war show that the government is expecting between 500,000 and 600,000 jobs to go in the public sector and between 600,000 and 700,000 to disappear in the private sector by 2015…

A slide from the final version of a presentation for last week’s budget, seen by the Guardian, says: ‘100-120,000 public sector jobs and 120-140,000 private sector jobs assumed to be lost per annum for five years through cuts.

• The Labour leadership contest continued apace this week, with David Miliband giving a keynote speech on education on Wednesday and Ed Miliband speaking about the role of the state and the future of social democracy on Tuesday, while Ed Balls, in an article for today’s Tribune, described the “reckless and unfair” Budget as “the Budget from hell” and called it “the most unfair and regressive Budget in a generation”, and Andy Burnham explained why he’s the right man for the job on the ‘This Week’ sofa last night.

Left Foot Forward has an exclusive interview with Diane Abbott this evening; it will appear live on LFF at 10.

Justice secretary Ken Clarke, who on Wednesday announced a new approach to crime and justice, saying fewer offenders should go to jail and be given community sentences instead. He spoke out against short sentencing and said “just banging up more and more people [for longer] without actively seeking to change them is what you would expect of Victorian England”, calling for an end to the cycle of offending and the creation of “a more intelligent, consistent and transparent system of sentencing” and pledged to introduce “a rehabilitation revolution”.

His speech was broadly welcomed by progressives, though Left Foot Forward cautioned that it couldn’t be done on the cheap, advising him to “ditch the Daily Mail, and keep the cheque book”.

Backbench Tory Philip Hollobone, who this week tabled a private members’ bill calling for the burka to be banned in public, described by Michael White in The Guardian as “disproportionate and intolerant”. The Independent describes Hollobone as “one of the most right wing” MPs in Parliament, so right wing, adds the Indy, that “the UK Independence Party chose not to field a candidate against Mr Hollobone at the election because his views on Europe are so close to those of Ukip”.

Our analyis last weekend of the impact of the Coalition’s spending cuts, which revealed deprived areas would be hit hardest, finding “David Cameron’s constituency, which lies in Oxfordshire, will only receive half the level of cuts that the considerably more deprived South Tyneside – home to David Miliband’s South Shields constituency – will suffer”, and concluding that:

• The debate around the Budget’s impact on jobs;

• The debate on when to pull out from Afghanistan;

• The new US sanctions on Iran; and

The big news story of the past 24 hours is the story broken exclusively by Left Foot Forward last night that the Government will announce the referendum on the alternative vote next week, to be held next May:

@ardalby: Why do I think David Cameron has made his life difficult over nothing. Now Lab and Lib-Dems can embarrass him if Lab want #av #referendum

@pastyface43: are we having #AV #referendum next year because metropolitan boroughs don’t have local elections so surely turn out will be even lower there

@mistermaher: To most accurately reflect public opinion the #referendum on electoral reform will be a first-past-the-post vote. Ah, the irony.

@kenningtonkitty: Clegg playing “get out of jail card” early. Nothing to toss to the lions at conference now. #referendum

@HovellingHermit: BBC just breaking news that a referendum on a new electoral system will be held next year. #politics #democracy #news #referendum

@PoliticallyBrit: RT @demsoc: RT @bbcworld: A #referendum on a new electoral system is expected to be held on 5 May next year – BBC http://bit.ly/cZIu47