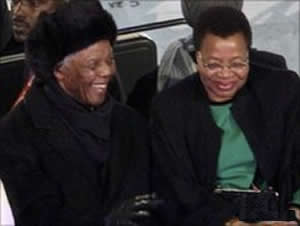 Our guest writer is Mark Beacon, campaigns manager for Action for Southern Africa (ACTSA), the successor organisation to the Anti Apartheid Movement; ACTSA campaigns for justice, rights and development in solidarity with people in southern Africa

Today is the first Nelson Mandela Day, which will be celebrated at the British Museum from 11-4. One week ago, the World Cup Final took place in Soweto’s Soccer City, an event that would have been unthinkable 20 years ago.

In the last few weeks people across the globe have had their impressions of South Africa and Africa challenged and changed. FIFA has rightly heaped praise on the country and the Congress of South African Trade Unions (COSATU), along with many others has described the tournament as “an unbelievable success”.

Millions of South Africans are rightfully proud of their efforts which have left the world praising the Rainbow Nation.

Those who said the tournament would be a disaster have been proved wrong. Predictions of a lack of accommodation and unfinished stadia in a crime ridden South Africa rapidly disappeared, replaced with a new found hate, or sometimes love, of the vuvuzela.

Now with the hundreds of thousands of fans returned home and the media spotlight no longer on South Africa, people are rightly asking who the beneficiaries of the tournament really are. No one could deny that FIFA and its corporate partners are high on this list, having reaped immense financial rewards.

Their legacy of 20 Football for Hope Centres for the whole continent may have some impact, but bears no resemblance to the legacy they could have left. Their demands for the hosting of the tournament could have certainly paid more attention to the needs of South Africa. Sadly, much of the massive wealth generated over the last month will not transform the lives of millions of South Africans living in poverty.

Many from South Africa saw the World Cup as a month long opportunity to promote the country to the world and open the doors for increased tourism, trade and investment. Perhaps we will have to wait a little longer to see if this legacy is realised but South Africa is already beginning to see the benefits.

According to official figures, unemployment in South Africa stands at 25 per cent, but many argue it’s closer to 40 per cent. Decent work is a major priority for so many people, trying to find a route out of poverty. The estimated 695,000 jobs provided in the construction, transport and hospitality industries have undoubtedly made a difference to the lives of many.

Although many of these jobs were temporary, the World Cup has left many skilled and trained individuals in these industries; the challenge for South Africa is how to use these new skills to build the much needed schools, clinics, houses and roads which poor communities so desperately need.

Questions may be asked about what will become of the four new stadiums, but South Africa has also benefitted from the new road and transport infrastructure, in a country where many transport systems were designed to support the apartheid system, transporting the black majority to serve the white minority.

Perhaps the greatest legacy of the World Cup is one that can’t be measured on any development index – an unprecedented feeling of national pride and self esteem. Shortly after the final Archbishop Desmond Tutu said:

“If you had told me we would be experiencing what we are experiencing, I would have asked ‘Who is your psychiatrist?’”

COSATU also echoed the impact of the World Cup on the national consciousness:

“We know now that South Africans love their country and can unite behind a single goal, irrespective of the things that used to divide us in the past.

“For four weeks we stood united behind the goal of hosting the World Cup and behind our national soccer team.

“For a month there was no racism, sexism, tribalism, or regionalism but just proud South Africans.”

World Cup 2010 was never going to be the one solution for all South Africa’s problems. The massive wealth generated by the tournament has sadly not reached the pockets of many of the nations’ poorest. However, it has changed the image of South Africa, and also Africa, across the globe.

It has left the nation with some new jobs, many new skills, and deepened peoples sense of pride and unity in a country where only 16 years ago rights and freedom were denied. The challenge for South Africa is now to build on this success. Let’s hope that President Zuma’s words on Monday ring true:

“Yesterday was the final, but it was definitely not the end. It was the beginning of a better future for South Africa and Africa.”

We should celebrate South Africa’s hosting of the World Cup; a celebration of a democratic, non racist and non sexist country. The challenge is to deepen our solidarity to help South Africa build on the spirit of pride engendered and create a better future.