With a date now set for a referendum on switching the electoral system to the Alternative Vote, a debate will no doubt rage inside both the Labour and Conservative parties as to how they should campaign. 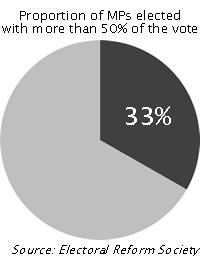 With a date now set for a referendum on switching the electoral system to the Alternative Vote, a debate will no doubt rage inside both the Labour and Conservative parties as to how they should campaign. Labour MPs and activists, regardless of their views on proportional representation, should support a “Yes” vote for three simple reasons.

First, the Alternative Vote is an intrinsically fairer system that first-past-the-post. Under Britain’s current electoral system only 33 per cent of MPs were elected with a clear majority (50%+1) of support in their constituencies – the lowest ever proportion. AV ensures that every MP would have this legitimacy by reallocating second preferences. But the system only changes the way votes are cast and counted meaning that any concerns about how some electoral systems remove the constituency link are not relevant.

Second, the Alternative Vote is popular while first-past-the-post is unpopular. A recent poll by ComRes for the Independent showed that 78 per cent of voters believe the current electoral system should be replaced while 56 per cent would back a switch to the AV system.

Third, the Alternative Vote is likely to help Labour at the expense of the Conservatives. Post-election research by US pollster Stanley Greenberg showed that 37 per cent of Lib Dem voters wanted a Labour-Lib Dem coalition compared to 29 per cent who supported a Tory-Lib Dem coalition, a further 21 per cent wanted a Unity government. Since the election, the Lib Dem vote has collapsed to 16 per cent – twice as many of these switchers have turned to Labour compared to the Tories. A projection by the Electoral Reform Society of the 2010 election outcome under the Alternative Vote showed the Tories on 281 (-26), Labour on 262 (+4), and Lib Dems (+22).

Ed Miliband has put out the following statement:

“I strongly support the case for introducing the Alternative Vote, to ensure greater fairness for voters and greater legitimacy for our MPs in Westminster. Whenever the referendum takes place, I will campaign with other supporters across the political spectrum for this important change.”

“I think that it’s important that we move to a system where every Member of Parliament has at least 50 per cent of the vote of their constituents.”

33 Responses to “Labour should support a “Yes” vote on AV”