The internal contradictions of the Government’s immigration policy have been laid bare during the prime minister’s trip to India. 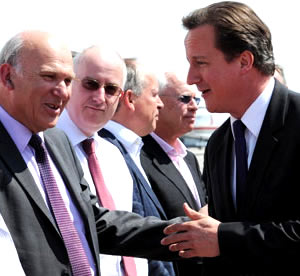 The internal contradictions of the Government’s immigration policy have been laid bare during the prime minister’s trip to India.

Yesterday’s comments from Vince Cable that he wanted the UK to have “as liberal an immigration policy as it is possible to have” sit in stark contrast to David Cameron’s insistence today that the government remains committed to reduce net immigration to the UK to ‘tens of thousands’.

This isn’t simply a case of political differences within the Coalition – the Government is facing two real policy tensions on immigration. The first is between the Government’s desire to support a private sector-led recovery and its intention to reduce net immigration by capping the number of highly-skilled migrants who can come to the UK to work.

The Government is consulting (including, apparently, with the Indian government) on how the immigration cap will work, and various options seem to be on the table to ‘soften’ the policy and reduce the impact on business; but it is hard to see how any cap that will satisfy those who want to see drastic limits on migration to the UK can also meet the needs of the economy.

The second policy tension is that the cap looks likely to fail on its own terms – it will not significantly reduce net immigration. Net immigration to the UK is falling fast already in response to changing economic conditions, and the cap applies only to a small part of immigration flows to the UK (ironically, to the most beneficial and least controversial parts of those flows).

Perhaps more significant than these policy tensions is a political dilemma, highlighted by Vince Cable yesterday when he said:

“We’re trying to reconcile two different objectives, one of which is to reassure the British public that immigration is under control, and the other is to have an open economy where we can bring in talents from around the world…

“We are arguing, within government, about how we create the most flexible regime we can possibly have, but in a way that reassures the British public.”

But the coalition may be about to learn a lesson that Labour ministers learned in recent years – that immigration policy changes don’t assuage people’s political concerns about immigration. The two objectives highlighted by Cable are not incompatible, but they are separate problems. The public (rightly) want the government to be in control of immigration, but a cap is the wrong approach.

The way to deal with public concerns about migration is to change the political narrative and tackle a wider set of issues including the labour market, housing, and changing communities – the immigration cap does neither.