The Institute for Fiscal Studies has published an article today showing that it won't be easy for the Coalition Government to meet the Conservatives' pre-election pledge to "increase the proportion of tax revenue accounted for by environmental taxes". 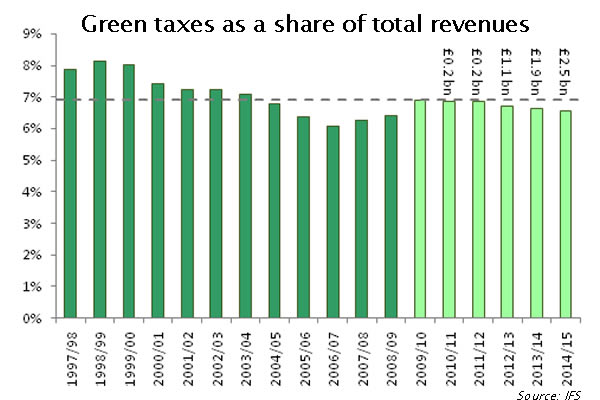 The Institute for Fiscal Studies has published new research today showing that it won’t be easy for the Coalition Government to meet the Conservatives’ pre-election pledge to “increase the proportion of tax revenue accounted for by environmental taxes” – with the proportion raised by green taxes set to fall steadily over the next five years.

Using the most recent estimates for future receipts from the Office for Budget Responsibility following the June emergency Budget, green taxes are forecast to fall from 6.9% of total receipts in 2009/10 to 6.5% in 2014/15.

As the chart below shows, simply to get the share in 2014/15 back to the 2009/10 estimate would require additional green tax revenues of £2.5 billion on top of the £45.8 billion forecast for 2014/15 (an increase of around 5%), assuming that those extra receipts were offset by cuts in non-environmental taxes.

The analysis concludes that if the Coalition wished to go further, and exceed the level inherited from Labour, it would need to raise an extra £6.7bn – nearly 15 per cent more than currently forecast – raising the share of green taxes to 7.5 per cent by 2014/15.

Given the scale of the fiscal retrenchment required over the coming years, and the pledge made in the Coalition agreement, it is perhaps surprising that the Government did not take the opportunity to spell out any firm increases in green taxes in the Budget.

They did however suggest there would be a consultation on reformulating Air Passenger Duty (APD) into a charge per-plane rather than per-passenger. A similar reform was consulted on by the previous Government, but was ultimately rejected in favour of reforming the APD system.

In their manifesto, the Liberal Democrats proposed to go ahead with this reform, to raise an additional £3 billion per year. If this were to happen, this would raise just more than enough (based on current forecasts) by the end of the Parliament for the Government to meet the pledge to raise the share of green taxes in total revenues, but with little margin for error.

17 Responses to “IFS: Proportion of tax revenue raised by green taxes likely to fall this Parliament”