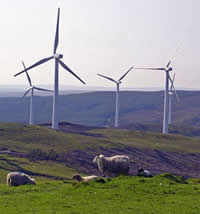 In a recent debate in the House of Lords, the Conservative energy minister Lord Marland – who will be overseeing the passage of upcoming new energy legislation through the House of Lords – appeared to contradict his minister in the Commons when he said:

“Under the previous Government, 14 gigawatts of onshore turbines were approved, 70 per cent of which is under way. It is our determination that there should be no dramatic increase in this and that the emphasis should be offshore.”

A week earlier, in response to a question from Matthew Hancock MP, energy minister Charles Hendry had stated:

“We want communities to benefit directly from any wind farms that they host.

“That is why we will allow councils to keep the additional business rates paid by wind farms and support communities in having a stake in appropriately sited renewable energy projects such as wind farms.”

“The Government are committed to the development of wind energy in the UK.

“As an island nation we have outstanding wind resources and wind energy is an indigenous source of energy which is needed to meet our renewable energy and climate change goals.

“The wind industry can be a key player in creating the investment, exports and jobs we need to bring back economic prosperity, and the UK is already a world leader in offshore wind. We also want communities and individuals to benefit from the increase in renewable energy, including wind power, and to own a stake in our collective low carbon future.

“This is why we committed in the Coalition programme for Government to encouraging more community-owned renewable energy and allowing communities that host renewable energy projects to keep the additional business rates they generate.”

As we previously reported, the health secretary is known as an opponent of wind farms, and a Comres poll showed that only 7 per cent of Tory parliamentary candidates supported the expansion of onshore wind. But the Secretary of State Chris Huhne is an avid fan of wind farms and he told an energy industry conference last month:

“We have enormous potential in renewables. Thanks to the Renewables Obligation, onshore wind has become cost competitive. The UK is already the world leader in offshore wind and we are also supporting wave and tidal stream. The prospects for growth in all these areas is excellent.”

Left Foot Forward is left wondering what the position of the government actually is in relation to onshore wind?