Labour leadership hopeful Ed Miliband has called for Scottish Labour to be allowed to formulate its own policies free from interference from London and attacked David Cameron's 'respect' agenda with the devolved bodies in a visit to Edinburgh yesterday. 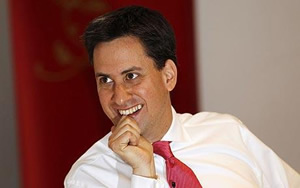 Labour leadership hopeful Ed Miliband called for Scottish Labour to be allowed to formulate its own policies free from interference from London and attacked David Cameron’s ‘respect’ agenda with the devolved bodies in a visit to Edinburgh yesterday.

“I think the policy in Scotland, for Scottish Labour, should be decided in Scotland. For me that’s not controversial. Under my leadership we would lighten up about difference because I think we gain from difference.”

The shadow climate change secretary continued by describing Labour’s leader in Scotland, Iain Gray, as having been “exemplary” before launching an attack on David Cameron’s so-called respect agenda with the devolved bodies, adding:

“The ultimate disrespect is what this Government is going to do to public spending and the public sector, including here in Scotland.”

His comments come just weeks after a visit to Scotland by his brother David; during that visit, the shadow foreign secretary called for a return to power for Labour in Holyrood to be used as a “laboratory” of what Labour in power UK-wide could achieve. He had said:

“I’ve said to Iain Gray that particular ideas on affordable housing and safer streets could be a laboratory to show what Labour can do. Alex Salmond’s administration has over-promised and under-delivered and has disappointed its own supporters, as well as voters as a whole.”

Meanwhile, during his own recent visit, fellow leadership contender Andy Burnham has pledged to make next year’s Holyrood elections a priority, concluding that victory in Scotland would be a sign that Labour were coming back. In Wales, meanwhile, the man who masterminded Carwyn Jones’ leadership campaign victory, education minister Leighton Andrews, has called for the UK party to follow Wales’ lead in how to elect a leader.

Writing in the Guardian he said:

“Labour’s leadership election in Wales saw a genuine battle of ideas that was good for the party. One can only hope that now nominations have closed, the same will be true of the UK leadership contest. It matters to Labour in Wales that Labour in Great Britain is in a position to win again at the next general election.

“But a battle of the bland won’t do it for us. So let’s see the same preparedness to argue out ideas that we had in Wales last year, rather than a rolling-out of platitudes. Hyperactivity is no substitute for deep thinking. A leadership election should not be a form of distraction therapy after a political defeat.”

“It is curious, already, how little influence Welsh Conservatives and Liberal Democrats have been able to exercise in their coalition’s initial negotiations compared to their Scottish counterparts – particularly on fairer funding for Wales, compared with Scotland.”

Andrews then concluded by calling for a debate that reached out to areas outside London:

“Personally, I am bored with the debate about whether this is the end of New Labour. It’s a debate from the M25’s inner political bubble. With one exception, Labour’s leadership candidates represent seats outside the M25. But do their political mindsets live there? Time will tell.”

3 Responses to “Ed Miliband: Scottish Labour should be free to formulate its own policies”