Labour leadership candidate Ed Miliband has challenged Chris Huhne to stand up against "free-market zealots", accusing the climate change and energy secretary of "turning your back on green industry". 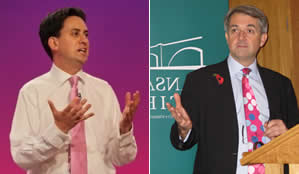 Labour leadership candidate Ed Miliband has challenged Chris Huhne to stand up against “free-market zealots”, accusing the climate change and energy secretary of “turning your back on green industry” and putting at risk Britain’s reputation around the world for “leadership” in the field. Mr Miliband’s letter follows “deeply worrying reports” the Coalition are going to scrap the Green Investment Bank, unveiled by Labour in March.

On the cutting of support for green industries, Mr Miliband writes:

“On 5 July you announced support for UK offshore wind technology. But a week later you announced you are slashing funding for new projects by a third. You have also refused to support Labour’s £60m competition for ports which is vital to attracting major offshore wind companies to Britain.

“This leaves your policy on renewables in complete chaos. You give with one hand but take with the other. We are the world leader in offshore wind thanks to Labour, but this vital industry needs support.

“Last week you also announced that the Carbon Trust will receive a huge cut in funding for low carbon technology and business support. You have called for a clean energy revolution but we need British business to be at the forefront of this revolution. Cutting support for clean energy projects is a disaster for British business.

“The test of your green credentials is whether you can provide proper support to a valuable British industry which the market would otherwise not back.”

And on green jobs, he adds:

“We assisted some of Britain’s most dynamic home-grown low carbon businesses – from nuclear engineering to cable manufacture, from marine energy technology to aerospace. Under our proposals we anticipated that an additional 400,000 jobs in the low carbon sector would be created by 2015, taking the total figure to well over 1.2 million. Do you have a target – and if not, why not?

“I welcome the fact you are pushing for tough emissions cuts on a global level but your actions at home actions including scrapping the loan to Sheffield Forgemasters completely undermine your case. The government is behaving exactly like the banks it likes to criticise for favouring finance over industry.

“You claimed to be the ‘greenest government ever’ but so far you are turning your back on green jobs and green industry.  I urge to stand up to the free-market zealots and keep our plans for an active government to shift our economy towards growth where the planet no longer pays the price.”

He concludes by stating that if Mr Huhne thinks again, he will have his support.