And the winner is... Londonderry! Or should that be Derry? Apparently it’s both these days. The ‘Derry-Londonderry’ bid was announced last night as the first British Capital of Culture for 2013. 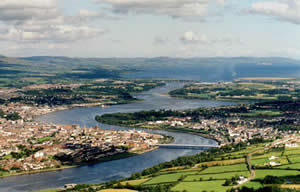 And the winner is… Londonderry! Or should that be Derry? Apparently it’s both these days. The ‘Derry-Londonderry’ bid was announced last night as the first British Capital of Culture for 2013. But bad news for fellow shortlisted cities – Sheffield, Birmingham and Norwich – who were likewise hoping to scoop up our Mini-Me version of European Capital of Culture.

And Ironic, perhaps, for a city where many of its inhabitants see themselves as Irish, not British. UK teatime viewers may also have been a bit surprised to see the beaming visage of Northern Ireland’s deputy first minister, Martin McGuinness, on the BBC’s ‘One Show’, as the bid was announced.

Derry city centre was famously described as looking as though it had been “bombed from the air” during his tenure as adjutant of the Provisional IRA in the city during the 1970s. Nevertheless, he said he was “over the moon”, describing the award as a “precious gift for the peacemakers.”

High aspirations for a mere bauble? But there is a harder edge to why 29 UK cities fought for the title. Following Liverpool’s successful year as European Capital of Culture back in 2008 there is now a real appreciation of the economic impact culture can bring.

During Liverpool’s year in the spotlight, an extra 9.7 million visitors came to the city, generating revenues of £754 million for Liverpool and the immediate surrounding area. And the city’s reputation took a shot in the arm too – 77 per cent of visitors felt the city was “safer than I expected”. So long to ‘Scousers-nick-cars’ jokes. Oh, and there was a 10 per cent increase in arts audiences to boot.

So what tipped the scale in Derry’s favour?

Well having a stellar campaign certainly helped. And an interesting international dimension too. Both the first and deputy first ministers, along with the Irish prime minister, Brian Cowen, were vocal supporters. But extra muscle came courtesy of the economic envoy to Northern Ireland, Declan Kelly. As a man who reports directly to US Secretary of State Hillary Clinton, he is clearly someone who gets things done; my guess is that poor old Norwich didn’t stand a chance.

But the road ahead is not without difficulties. Deciding on a unified cultural offering in this deeply divided city will be a diplomatic toil. So, too, more practical measures. Protocol arrangements around any royal visit to the city will certainly tax royal flunkies. Mind you, following Prince Charles’s impromptu meeting with the former director of publicity for Sinn Fein at Glastonbury, anything is now possible.

But the love-in has limits. Lord Saville’s report into Bloody Sunday has yet to play out its endgame. Northern Ireland’s Public Prosecution Service is looking at whether perjury (if not murder) charges should be brought against the soldiers who killed 14 men on the streets of Derry 38 years ago. Civil action may also be brewing. Potent reminders of the tortuous recent past.

Derry is a place that has suffered much – but despite the formidable lobbying clout it managed to bring to bear, it is a city rich in culture and can punch its weight on merit alone. To borrow a line from its famous son – and prominent bid backer – Seamus Heaney:

I am the tall kingdom over your shoulder;
That you would neither cajole nor ignore.

11 Responses to “Derry to be first British culture capital”