In recent weeks three separate pamphlets have been published which take issue with the research and the analysis of Richard Wilkinson and Kate Pickett’s widely acclaimed book ‘The Spirit Level: why equality is better for everyone’. 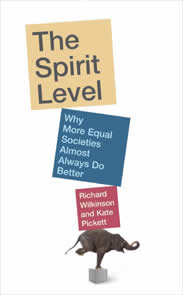 In recent weeks three separate pamphlets have been published which take issue with the research and the analysis of Richard Wilkinson and Kate Pickett’s widely acclaimed book ‘The Spirit Level: why equality is better for everyone’.

The authors of The Spirit Level have already written a detailed response (and also this one published in The Guardian) which expose “the serious methodological errors” in Policy Exchange’s work; point out the lack of any peer-review of their detractors’ work; and cite the many other academics who have conducted research which supports The Spirit Level’s conclusions.

But there are some further gaping holes in the Policy Exchange and TaxPayers’ Alliance’s publications which are worth pointing out.

First and foremost, The Spirit Level is not the only influential study to recognise that socio-economic inequality, particular in the distribution of income and assets, is also profoundly damaging to individuals, families, society and the economy.

This year alone we have had the Marmot Review into Health Inequalities and John Hill’s National Equality Panel’s report – written by the current president of the British Medical Association and the Professor of Social Policy at LSE respectively. Both men conclude that while the poorest suffer most and require most support to boost their life chances and well-being, improvements can only happen once there are fewer gaps between all sections of society.

As Marmot puts it:

“Focusing solely on the most disadvantaged will not reduce health inequalities sufficiently. To reduce the steepness of the social gradient in health, actions must be universal, but with a scale and intensity that is proportionate to the level of disadvantage.

“We call this proportionate universalism.”

Will Hutton, the very person the government has entrusted with its review of public sector top pay, has just written a book (publication imminent) called ‘Them and Us’: politics, greed and inequality – why we need a fair society. The respected cartographer Danny Dorling has also just published a book ‘Injustice – why social inequality persists’ which pulls together reams of ONS and other data to draw parallel conclusions to The Spirit Level.

Politically this new emphasis has also been evident in the commitment by the Mayor of London, Boris Johnson, to a London living wage of £7.85 an hour and David Cameron’s view that the differential between highest and lowest paid in any public sector agency should be no greater than 1:20. The election campaign, the Coalition Agreement and most recently the Budget have all been framed in terms of fairness, who should be paying the burden for reducing the deficit, and whether resources should be targeted most only at those at the bottom or more universally.

Policy Exchange and other recent critics conveniently forget that The Spirit Level has been embraced by people across the political spectrum.  Positive reviews have been penned from the likes of The Daily Telegraph’s economics editor and The Economist; David Cameron referenced it in his Hugo Young lecture and Michael Gove was effusive in his praise when interviewed alongside Richard Wilkinson on the Today programme. Demos have even written a pamphlet (with a foreword by David Willetts) which proclaims on its cover that “equality can be a core conservative value”.

The embrace from the right has always ever only been partial; and policy prescriptions  emanating have tended to focus on tackling poverty at the very bottom but not inequality throughout society. There are now renewed attempts within the Conservative party to abandon the concept of relative poverty and say that only absolute poverty matters. That is the political context for what looks like a co-ordinated – but academically suspect – attack on The Spirit Level.