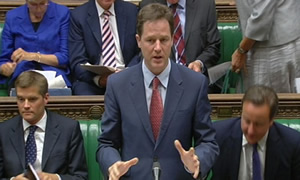 Our guest writer is John Costello

Nick Clegg’s Parliamentary Voting System and Constituencies Bill was published yesterday. Far from ushering a new era that puts “power in the hands of citizens, rather than politicians“, the legislation removes local control and contains carve outs for Lib Dem MPs.

In his first speech as Deputy Prime Minister, Nick Clegg spoke, of how he had:

“spent my whole political life fighting to open up politics … This government is going to transform our politics so the state has far less control over you, and you have far more control over the state …

“This government is going to break up concentrations of power and hand power back to people, because that is how we build a society that is fair.”

How ironic, then, that Clegg’s new Bill seeks to abolish public inquiries into Boundary Commission proposals. A system that has depended on transparency for its legitimacy is being replaced with a top-down, unaccountable and opaque process that locks the public out of deliberations and stops them seeing what is being done to the boundaries where they live until it is too late.

In order to complete his boundary review by 2013 – necessary, he says, to leave time to select candidates for the 2015 election – Clegg has not only taken away the public’s right to openly challenge Boundary Commission decisions; he has also effectively excluded millions of people from the mathematical calculations that will shape the new, shrunken 600 seat House of Commons. That is because there is no time between now and December, when the review begins, to do anything significant about registering the millions of eligible voters who are missing from the electoral roll.

As well as being undemocratic, the bill is shamelessly partisan.

It excludes two seats from the arithmetic rules that will be forced upon the Boundary Commissions. The Western Isles (SNP) and the Orkney and Shetland Islands (Lib Dem) are exempted from the need to meet new quotas because they have too few electors.

But in practice other seats are spared by special “geographical exemptions” that appear to have been devised with Lib Dem seats in the Scottish Highlands in mind. The Bill states that no seat can be enlarged beyond 13,000 square kilometres. Alongside that, tucked away in Schedule 2, Rule 4(2), is a previously unmentioned exemption that, in addition to the 13,000 sq km limit, constituencies larger than 12,000 sq km are freed from the need to hit the quota of registered electors.

Charles Kennedy’s constituency is some 25,000 electors short of the proposed quota, and should really be in danger of abolition and break up. But it happens to be over 12,000 sq km square kilometres in size.

But this is not just about Kennedy’s seat. While the 12,000 sq km rule saves him, the 13,000 sq km limit may help to save his Lib Dem neighbour, John Thurso MP, who represents the most northern mainland seat – Caithness, Sutherland and Easter Ross. That seat only has around 50,000 electors and is under 12,000 sq km.

But its geographical position means it has nowhere to expand other than into Kennedy’s seat, which the size rule would prevent. So he would in effect be saved too. Something similar could happen with Argyll and Bute – another Lib Dem seat to the south of Mr Kennedy.

A question Nick Clegg’s team must answer is whether these rules were put in place to make it possible to hang on to a whole host of Lib Dem seats that, if mathematical purity was applied, ought to be lost.

The problem with clever, clever plans like these is that they can easily fall apart, especially when the Boundary Commission actually come to do the sums and draw the lines. It may be that they are simply unable to reconcile the mathematical formula with the geographical exemptions without producing boundaries of such bizarre shapes and sizes that they would turn the process into a mockery.

But since the Lib Dems want to abolish the right to hold public inquiries, we won’t know the true extent of the mess until it is too late to stop it.

21 Responses to “Clegg’s Bill is undemocratic and partisan”