In his first major speech since leaving office, Gordon Brown called for Africa to be at the heart of a new global growth strategy, aided by a mass roll out of broadband. 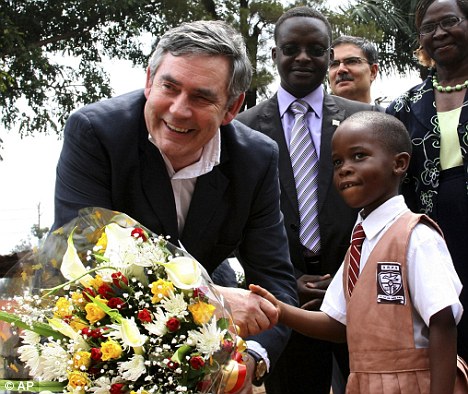 Gordon Brown yesterday used his first major speech since leaving office to call for Africa to be at the heart of a new global growth strategy, driven by a new approach to aid and a mass roll out of broadband internet.

In a speech to African Union leaders at their summit in Kampala Gordon Brown said the ascent of Africa could lead the world out of recession:

“Future growth in the world economy, and future jobs in the developing world, will depend on harnessing both the productive potential and the pent-up consumer demand of this continent and the developing world. There is a shortage of global aggregate demand, so today every job not created in Africa is a job lost to our common global growth; every business that fails is a business lost to global growth; every entrepreneur whose idea can’t be realised is a driver lost to global growth.”

“There is an alternative to a decade of low global growth which would fail to meet both the development needs of Africa and the growth needs of Europe and America. To me the answer is obvious: as we struggle to find new sources of growth we must turn here, to Africa, to this continent of huge potential and talent.”

A rethinking of aid can help stimulate this growth. Aid should continue to support Africa’s public sector to provide essential services (health, education and water), but aid should not be an end in itself, he said. Aid should be seen as an investment in equitable growth and sustainable development by helping to unleash the private sector.

Gordon Brown also argued that a key strategy for future growth in Africa will be the possibility of Africa leapfrogging a stage in technology and gaining mass access to broadband internet access. He used the speech to announce that he was working with African leaders and experts in the field including Sir Tim Berners-Lee, the father of the world wide web, for a major campaign and programme of work on the issue:

“Africa’s best hope for diversification into the high-value sectors is a massive acceleration in the use of IT. A third of people in Africa now have mobiles, but less than 1% have access to broadband. I truly believe that the rapid expansion of internet access in Africa could transform how Africa trades, learns and holds political power accountable.”

If Gordon Brown does launch an initiative in this area he’ll be following a great tradition of former Labour PM’s – Tony Blair and Harold Wilson both set up international development initiatives, establishing the African Governance Initiative and War on Want respectively. The Labour Campaign for International Development is currently interviewing the Labour Leadership candidates about their priorities – whatever their answers and whoever becomes leader, let’s hope that proud tradition continues.