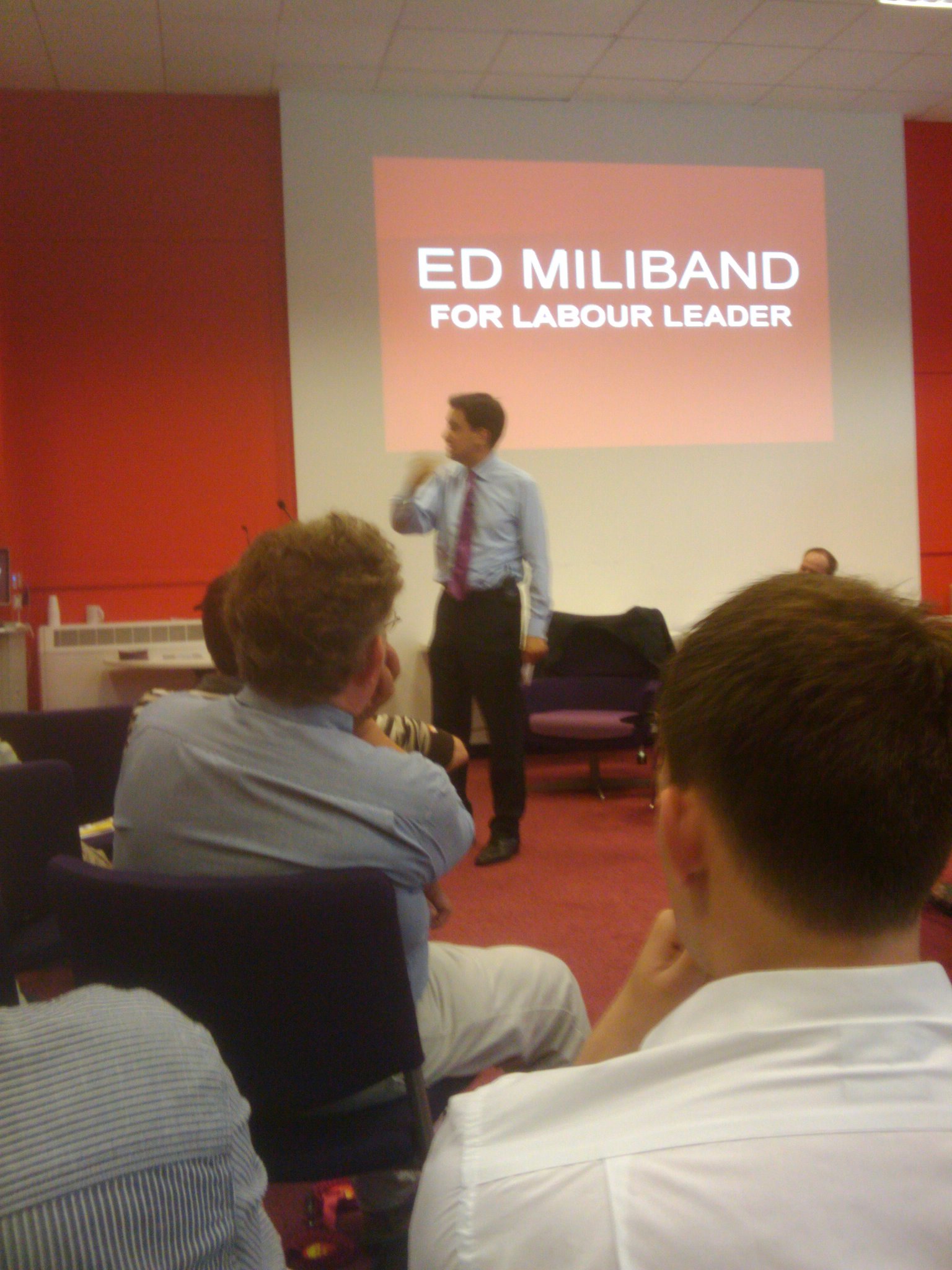 On hearing that Ed Miliband would be speaking at an ‘Ed Miliband for Labour Leader’ event yesterday, on the edge of my ward and less than a mile from where I live, I asked his office if I could come along and write something about it for Left Foot Forward. To their credit, they agreed.

When I arrived, my right to come in was queried by a local Labour candidate who presumed that Ed Miliband’s team were unaware that I was a local Green Party politician. A phonecall went through to his campaign HQ; they confirmed that they were happy for me to be able to attend. A little bit of pluralism in action, which impressed me; I wonder if Balls’ or Burnham’s teams would have been so willing.

When Ed Miliband arrived, he spoke for a good while fluently without notes, and then took swathes of questions from the crowd (mostly Labour activists, members and Councillors).

He was plainly making a play to be recognised as ‘the change candidate’, by implicit contrast with his brother. (One audience-member asked him pointedly if his sole case for being picked by the membership was that he wasn’t a Blairite). He said that “The question at this [Labour leadership] election is who is willing to confront what went wrong under the last government”, and then listed various such items, including:

• the failure until near the end of the Labour government’s tenure to support council house building and stock-retention in any way (One of the biggest supportive noises of the evening from the audience was when he said that things would have been much better if John Healey had been made Housing Minister in 1997);

• the lack of any serious industrial policy until late on in the government; and

• a poor record on civil liberties.

He expressed support for Ken Clarke against Michael Howard on the question of whether ‘prison works’ or not, and demurred from the view of some in Labour that it was possible or wise to out-Right the Right on issues such as crime and terrorism. He didn’t want Labour to attack Clarke or Theresa May as ‘soft on crime’.

On immigration, he said that “It’s a class issue”. In other words that in most cases it isn’t racism but worries about the driving down of wages etc., that motivates working-class concern about immigration. He backed a Living Wage though, disappointingly, he seemed unprepared to legislate for it, preferring to leave it to local initiatives and to ‘demonstration effects’ and ‘leadership effects’ from bringing it in in public services. It’s true that since Greens introduced the idea of a Living Wage, most progress on it has been made by local Councils – but if government were to underwrite it, it would of course be far more effective.

Since I was attending as a citizen-journalist, and a member of another political Party to boot, I didn’t want to try to take up any of Ed Miliband’s time, as the meeting ended and local Labour members got their photos taken with him. But then I heard him saying to his aide, “Where’s the Green guy; I must touch base with him before we move on”. So I went up and introduced myself, and was able to ask him the question that I have been trying to get an answer to from him (or from his brother) for the last few years:

“You are widely thought to be the ‘greenest’ of the Labour leadership candidates. In government, you often spoke proudly of Labour’s record on the issue of manmade climate change. But isn’t it a fact, once one counts carbon emissions in a scientifically-respectable way (incorporating embodied energy/emissions, and sea and air travel), that Britain’s emissions rose significantly from 1997 to 2010? Shouldn’t that – the failure of the Labour government to rein in Britain’s carbon emissions – be your starting point, in debating CO2 emissions, climate change, and the green agenda?”

His answer on the point about the non-inclusion of air and sea transport in the government’s figures disappointed me. He didn’t accept my point on the statistics, which are detailed in the sources that I gave in my recent piece over on Liberal Conspiracy about this.

His answer on embodied emissions was more interesting, and not unconvincing. He argued that it doesn’t make sense to count responsibility for emissions where power over them doesn’t lie. In other words, he held that emissions need to be counted where they originate, in the countries that can potentially control them. (Of course, one could counter that it would still be perfectly possible to exercise significant control over them, if our country were willing, as I believe it should be, to control products’ entry into our borders partly on the basis of their emissions footprint.)

As I left the event, I was left with the impression that Ed Miliband, for all that I am not particularly impressed with his actual record in government (as opposed to some of his ideas for the future), and for all that I still disagree with him about numerous important things (for example, Carbon Capture and Storage), is the Labour leadership candidate most likely (with the possible exception of Diane Abbott) to help take the political agenda in this country in the direction in which it most needs to go.

38 Responses to “A green perspective on Ed Miliband”