Thirty-eight years after 14 unarmed civilians were killed on the streets of Derry, the Bloody Sunday Inquiry will report its findings today. 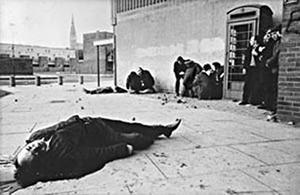 Thirty-eight years after 14 unarmed civilians were killed on the streets of Derry, the Bloody Sunday Inquiry will report its findings today. The Standard reports that: “Families of the Bloody Sunday dead are hoping their epic campaign to clear the names of their loved ones will finally end with the release of the long-awaited Saville report. After more than a decade and 30 million words of testimony, the longest and most expensive inquiry in British legal history will culminate in the publication of its findings in Londonderry. An air of anxious expectation has descended on the city as it awaits the outcome of the investigation into the killings of 14 unarmed civilians on January 30 1972 by British soldiers.”

The Telegraph reports the victims’ families remarks last night that “soldiers who shot civilians on Bloody Sunday should be prosecuted but spared prison”, adding that the report “will accuse the Army of unlawful killing” and is “expected to exonerate the dead of involvement in violence… Lawyers for the Bloody Sunday families are planning to press for those who opened fire to be prosecuted for murder”. The Guardian reports former taoiseach Bertie Ahern’s claim that “tried to dissuade Tony Blair from agreeing to the Bloody Sunday inquiry”; he said: “I had to put a lot of pressure on Tony Blair. All the advice he was getting from securicrats was to not go into a full judicial inquiry. I suppose you could understand why now, with the cost and the time. But we had done a submission, the Irish government had done a submission, and we had put a lot at stake in building up nationalist confidence that we would be able to work with the British government and work with Tony Blair.” While The Independent asks simply “Will the wounds ever be healed?”

The Guardian reports on the Chancellor’s claim that the ‘black hole’ in the public finances is “bigger than anticipated”, signalling his intention last night to deliver “an even tougher austerity budget”. Shadow chancellor Alistair Darling, however, accused the Coalition of “scaremongering”. The report adds: “Conservative sources said that extra tax rises would be in the order of £3bn, suggesting the possibility of a VAT rise of 1%. They said the crisis in the eurozone had strengthened the case for faster and deeper cuts than Labour’s pre-election proposed spending cut programme.” Yet Left Foot Forward yesterday reported there was “no case to cut more than Labour”, pointing out that: “Total managed expenditure is £2.8 billion lower while receipts are up £5.6 billion for 2010-11. This has contributed to the estimate of the current budget deficit falling from £124 billion at the Budget to £114 billion.” On the economy, the Telegraph reports that “Nick Clegg has warned that Britain risks losing control of its future unless immediate action is taken to curb the budget deficit”, with The Times reporting reduced growth forecasts have added “billions to the total George Osborne must cut to begin Budget rescue of the public finances”, along with his warning that the economy “may never recover from banks crisis”.

The Independent reports the impact of cuts in transport spending which could lead to “big hikes in rail fares, more potholes and fewer buses”. A report from the Campaign for Better Transport (CBT) will today reveal “train fares could rise by 33 per cent in this Parliament if fares increased annually by the rate of RPI inflation plus 3 per cent”, adding “overcrowding on trains will increase without extra carriages while it is vital to properly maintain the roads” and “cutting the Government’s bus service operator grant would result in 7 per cent fewer services, a 6.5 per cent fares increase and 94 million fewer miles of supported services”. CBT executive director Stephen Joseph said: “Our research shows that on transport spending the Government has a choice. It can go for easy cuts, taking money out of all budgets, upping fares and giving priority to big roads. Or it can go for smarter cuts which protect the spending that helps the economy, meets carbon and environmental targets and strengthens communities… There is a real danger that buses will become extinct outside the centres of cities and towns, as funding for them will be under threat.”

The Times reports the prime minister’s warning that Britain “must prepare for a casualty spike” in Afghanistan. He said there would be more British deaths in the war zone this summer, but the threat to Britain of an al-Qaeda attack from the region had decreased. A week after visiting Afghanistan for talks with President Karzai, Mr Cameron said: “This is the vital year.. We have the Forces needed on the ground. We have our very best people, not just military but leading on the diplomatic and development front as well, but I do not pretend that it will be easy. We must be ready for further casualties over the summer months as the so-called fighting season resumes and as Isaf extends its activity.” Re-iterating the reason for UK forces to remain in Afghanistan, he added: “Our Forces are in Afghanistan to prevent Afghan territory again being used by al-Qaeda as a base to plan attacks on the United Kingdom or our allies.. Afghanistan is not yet strong enough to look after its own security and that is why we are there.” The Guardian, meanwhile, reports that British troops “may begin Afghan pullout next year” with defence secretary Liam Fox hinting at withdrawal as the prime minister vowed “to bring soldiers home as soon as Afghanistan is safe”.

And The Guardian also reports that the older generation of MPs are “resisting” the new expenses system – though they have reportedly been told to “get used to it” by the man responsible for resolving complaints about the new system. The Guardian reports that: “Alan Lockwood, the former RAF officer appointed as the independent expenses compliance officer, intervened in the escalating dispute between the Independent Parliamentary Standards Authority and MPs who claim Ipsa’s system has left them out of pocket and unable to pay their staff salaries, rent and bills. He said the system was needed to counter the perception of “enormous fiddling” but that most MPs were happy with it and only a minority ‘mainly of returning MPs [are] having problems adjusting’.” It adds: “Ipsa’s problems were compounded tonight [last night] after it emerged that a technical fault meant that all returning MPs – 418 in total – were underpaid last month by £120. They were paid £5,358.54 rather than £5,478.17 in the first month that Ipsa administered MPs salaries. Ipsa said the shortfall would be made up in this month’s pay packet. At the weekend it emerged that the interim operations director at Ipsa, Nigel Gooding, is leaving his role three months early for the sake of his “health and sanity” after introducing MPs to the latest system of allowances.”