George Osborne claims there's a "trade-off" between cutting welfare spending and departmental budgets. It's a false choice and reflects only his ideological masochism. 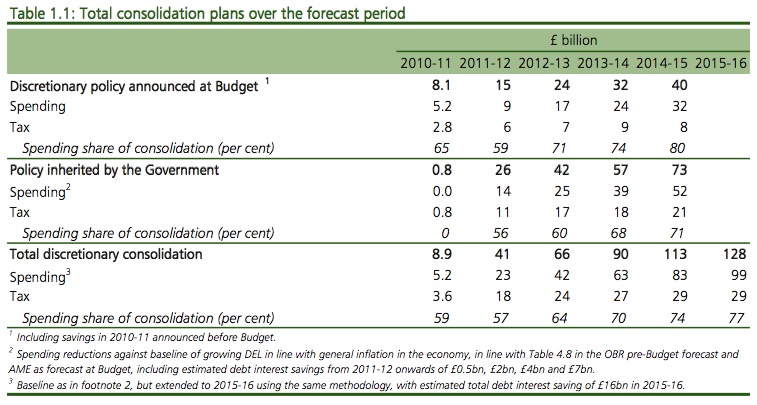 Today’s papers cover the backlash to George Osborne’s supposed “trade-off” between cuts to welfare spending and cuts to departmental budgets.

A number of papers report the warning from the Association of Chief Police Officer over cuts to police numbers. The Scottish Daily Record says, “Tory chancellor George Osborne plans to axe benefits for 60,000 disabled Scots”. Wales Online reports, “Osborne under fire as he targets long-term sick”. Finally, a Telegraph headline outlines that, “Accept cuts or we’ll target pensions, David Cameron warns unions”. But these headlines are not inevitable or, in the words of George Osborne, “unavoidable“.

As the Table below from last week’s Budget shows, the Coalition announced plans to rapidly increase Labour’s plans to “halve the deficit over four years” by cutting an additional £24 billion from public spending by 2013-14 rising to £32 billion by 2014-15. This will see public spending cut by a total of £99 billion by 2015-16.

The alternatives open to George Osborne are two-fold. First, he could revert to Labour’s already eye-watering plans – favoured by the Liberal Democrats before the election – to cut a significant but smaller chunk of public spending. Although details of what would constitute these cuts have yet to be given by the Labour party, the overall reduction levels – which first appeared in the March Budget – had the support of the money markets. Indeed, if the coalition cuts cause the rises in unemployment and cuts to growth predicted by many, they may end up raising rather than reducing the deficit.

Second, he could change the ratio of tax rises to spending cuts so that they reflect the 2:1 ratio favoured by Labour or the 1:1 ratio favoured by Norman Lamont and Ken Clarke in the 1990s and by a number of countries embarking on similar deficit reductions. The Chancellor opted against this route in order to announce tax cuts for big businesses including the banks; cuts to employers’ national insurance; and for the Lib Dems’ regressive tax threshold rise.

The choice facing Osborne is not a trade-off between welfare spending and departmental budgets, it is whether to pursue a responsible deficit reduction programme or a form of ideological masochism.