Lord Lester, the architect of the Human Rights Act, has tabled a Private Members’ Bill in the House of Lords to systematically reform English libel law. 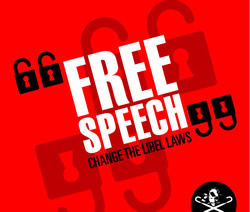 Michael Harris is public affairs manager of the Libel Reform Campaign, a joint NGO campaign by English PEN, Index on Censorship and Sense About Science

A fortnight is a long time in libel law reform. On May 21, Left Foot Forward reported on how the new government’s pledge to ‘review’ our libel laws didn’t go far enough in light of the strong manifesto commitments of both the Liberal Democrats and the Conservatives on this issue (and also Labour’s manifesto commitment).

Well, less than a week later, Lord Lester, the architect of the Human Rights Act, tabled a Private Members’ Bill in the House of Lords to systematically reform English libel law. You can read the text of the Bill here.

Lord Lester’s Bill covers a great deal of the recommendations of the Libel Reform Campaign including a statutory defence for responsible publication on a matter of public interest, clarifying the defences of justification and fair comment – renamed as ‘truth’ and ‘honest opinion’.

One of Anthony Lester’s aims is to bring our libel laws out of the 19th century and into the 21st. The Duke of Brunswick judgement which is the basis of the ‘multiple publication rule’ predates not just syndicated blog feeds but telephone lines and even the lightbulb. The Bill also defines the differing responsibilities of Internet Service Providers, hosts and individual authors.

There are also additional hurdles to prevent vexatious or litigious claimants from stifling free speech. One Fleet Street editor refuses to allow their paper to write anything about Russian oligarchs as they are so worried about a flurry of libel suits. Under Lester’s Bill, claimants will have to demonstrate ‘substantial harm’ in any libel action, and corporations will need to prove actual financial loss (incredibly, they don’t have to at present).

The Bill will also encourage the speedy settlement of disputes without parties having to bring in costly lawyers. As an aside, the Bill will also protect those reporting on proceedings in Parliament, after the recent outrage over Carter-Ruck using a ‘super-injunction’ to block publication of a Parliamentary question about international corporation Trafigura. Lester aims to give anyone reporting on parliamentary proceedings a cast-iron guarantee that their words are subject to parliamentary privilege (so they cannot be sued for libel or breech of privacy).

The Bill seeks to reduce the chilling effect on freedom of expression and recourse to self-censorship that results from the vagueness and uncertainty of the present law. It also aims to encourage the free exchange of ideas and information, whilst providing an effective and proportionate remedy to anyone whose reputation is unfairly damaged.

“The time is over-ripe for Parliament to replace our patched-up archaic law with one that gives stronger protection to freedom of speech. No Government or Parliament has conducted a thorough and comprehensive review.

“My Bill provides the opportunity to do so and to modernise the law in step with the technological revolution. It creates a framework of principles rather than a rigid and inflexible code, and it seeks a fair balance between reputation and public information on matters of public interest.”

Claimant lawyers have already started lobbying, asking whether these changes are necessary. They suggest the common law has changed with recent decisions such as the Simon Singh case and that the process of reform is underway.

Yet since 1938, review after review, including in the last 18 months our Free Speech Is Not For Sale report, the UN Human Rights Committee report, the Culture, Media and Sport select committee report, and the Ministry of Justice working party, have all concluded our libel laws have a chilling effect on free speech; the common law has failed for 80 years.

Lord Lester’s Bill, however, does not attempt to tackle the cost of English libel law, which is 140 times the European average. Here the claimant lawyers will battle to the end to defend their incredibly lucrative field of law. But changes have to be made. The average cost for the 20 most expensive trials in 2008 was £753,676.95. With extortionate costs, few, if any, NGOs or local newspapers could risk a single libel trial.

All three main political parties committed to libel reform in their election manifesto and the coalition government placed a ‘review’ in their coalition agreement. Yet after so many reviews all condemning our antiquated libel laws we need action.

Lord Lester’s Bill could easily be adopted by the new government as a centrepiece reform to enhance our civil liberties. The Liberal Democrats had especially strong words in their manifesto for reforming these laws. Will the government back the Bill now they have a concrete proposal to endorse – or are we yet again about to miss another opportunity for reform?