This week saw more evidence of just how savage the Coalition's cuts would be, while for Labour, the final five who made the leadership shortlist were unveiled. 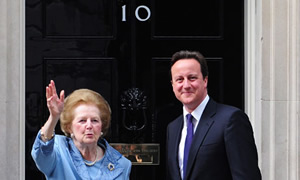 • The Chancellor this week warned of cuts of up to 20 per cent in Government departments – with benefits and pensions in the firing line. The cuts were described as “Osborne’s bombshell“, the true scale of which is gradually becoming apparent.

Yesterday, Left Foot Forward reported on the Coalition’s decision to scrap plans to give 500,000 children from the lowest paid families free school meals. The scheme would have lifted 50,000 children out of poverty; the Coalition decision will cost the poorest working families £600 a year.

On Tuesday, we reported on the job prospects of young people, with the devastating impact job of the scrapping of the future jobs fund: 205,000 jobs that would have been provided have been reduced to 111,000 – 94,000 jobs appear to have been lost.

And on Monday, we reported the impact of the cuts on Scotland, which faces 30,000 public sector job cuts.

• The first stage of the Labour leadership contest came to an end this week, in dramatic circumstances, with Diane Abbott narrowly making it onto the ballot paper by the slimmest of margins – getting the 33 nominations in the nick of time – thanks to the nomination of one of her rivals, David Miliband.

John McDonnell had pulled out of the contest earlier on Wednesday morning, with the majority of his supporters crossing over to Ms Abbott, who joins the shadow foreign secretary, his brother Ed, Ed Balls and Andy Burnham, with voting taking place in late summer and the winner announced at the Labour party conference on September 25.

On Thursday, Left Foot Forward reported the first post-nomination hustings debate, in which Ms Abbott appeared to come out on top. In other developments, Ed Balls came out in favour of a graduate tax and against “any attempts to allow variable tuition fees” while David Miliband criticised Labour MP Frank Field, that’s Labour MP Frank Field, for “working with the Tories to pave the way for the dropping of the target to abolish child poverty”.

• The main international story was the escalating row between Barack Obama and BP – or British Petroleum as the president likes to call it. The right-wing press demanded the prime minister take action over the perceived sleight, with the Mail calling on Mr Cameron to “stand up for your country”. To his credit, he has refused to rise up to the tub-thumping hysteria, embodied by Boris Johnson, who claimed President Obama was “beating up” BP.

Meanwhile, geological experts have estimated that as many as 40,000 barrels of oil a day – 1.7 million gallons – may be venting from the spill, double earlier estimates.

Diane Abbott, who this week proved anything’s possible, making it through to the next round of the Labour leadership election. She will liven up the debates, ensuring a different strand of opinion is heard, challenging the establishment candidates and proving Labour, unlike the monochrome Coalition, isn’t a closed shop.

Michael Gove, schools secretary, for scrapping Labour’s plans to lift 50,000 of the poorest children out of poverty, failing to extend free school meals to 500,000 of the poorest working families. The move will cost families up to £600 more a week – the equivalent of an extra penny in income tax per child.

Our investigation into Lord Lawson’s shady Global Warming Policy Foundation, whose aim is to cast doubt over the science of global warming. Left Foot Forward pressed Lawson again this week over his links to the oil industry – with the Tory peer once again refusing to reveal where the climate sceptics receive their funding from.

It’s nomination deadline day, and Jim’s getting a little bit worried he may miss out on the magic XXXIII…

• ‘Lady’ (as she trended on twitter) Thatcher’s visit to Number 10;

• Diane Abbott making the ballott; and

• David Willetts – his remarks on students being “a burden on the taxpayer”.

Tweetminster have this week revamped the site, with many new features and tools, including Channels. There will be more exciting innovations in the weeks to come.

There was quite a bit of anger out there on the Twittersphere this week over David Willetts’s comments on students; here’s a selection of the best:

@adogcalledbrian: #whatyoutalkinaboutwilletts I’m going to encourage my kids to take up crime rather than go to university lest they become a drain on society

@rjakesuk: Primary schools are a drag on resouces, send the kids back up the chimmney I say #whatyoutalkinaboutwilletts

@jezharvey: Willetts – you don’t like students and you don’t disagree w/homeopathy!! Opinion of you has changed HUGELY today #whatyoutalkinaboutwilletts

@AdrianWale: Thinking of designing some ‘Burden on the taxpayer’ t-shirts ready for Fresher’s Week. #whatyoutalkinaboutwilletts

@bigredminingman: For a man who is a visiting professor at 2 universities, calling students a burden is a bit two faced #whatyoutalkinaboutwilletts

13 Responses to “Look Left – The Week in Fast Forward”