Labour's leading leadership candidates have launched a series of attacks on the Coalition Government over the £6 billion of cuts. 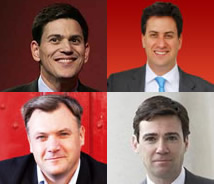 Labour’s leading leadership candidates have launched a series of attacks on the Coalition Government over the £6 billion of cuts – described as “painful” by the prime minister this morning. They took aim on everything from the cuts to university places to the cuts to the schools budget – with the Liberal Democrats singled out for particular criticism.

Shadow schools secretary Ed Balls yesterday called on Michael Gove to spell out in detail the £670 million of cuts required at the department for children, schools and families, questioning the lack of detail, the fact there had been “no statement to Parliament, no communications to concerned schools or local authorities” and “no answers to  my questions in last week’s Queen’s Speech debate”.

In a letter to the schools seretary, Mr Balls called on him to: confirm that funding for schools will only be protected in 2010/11; explain where funding for free schools could be found “without cuts to the budgets of existing schools”; explain whether he has increased the burden of cuts in 2010-11 that will fall on services financed by local government expenditure, particularly children’s social services; and confirm that more than 10 per cent will be cut from the DCSF grant to local authorities.

“I’m very worried today hearing Vince Cable sounding a very elitist note about university education… It’s wrong to drop the future jobs fund and it’s plain wrong to cut university places. You’ve got to give people hope and you don’t pull the rug from under people.”

Shadow foreign secretary David Miliband, meanwhile, accused Nick Clegg of “breathtaking hypocrisy” over cuts to frontline services “which he campaigned against in the general election”, and also warned of the danger of ending the future jobs fund.

Appearing on the Andrew Marr Show, he said:

“The coalition government have got a honeymoon, but Nick Clegg has shown breathtaking hypocrisy in his Observer column today talking about the cuts he campaigned against in the general elections… They’re repeating the mistakes of the 80s – it’s broken promises not a broken society.”

“The coalition government promised efficency savings in the coming year and are in fact imposing deep and unfair cuts affecting jobs and services. It is a broken promise, it is short termist because it will damage our economy and it is unfair because it will hit the poorest in society.“