The English Defence League's claims to be a non-racist grouping suffered a further blow at the weekend with the revelation that the leader of the EDL, Tommy Robinson, is a former British National Party member jailed for a year for assaulting an off-duty police officer. 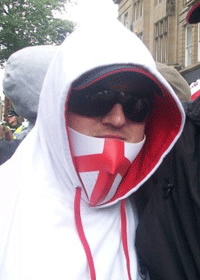 The English Defence League’s claims to be a non-racist grouping suffered a further blow at the weekend with the revelation that the leader of the EDL, Tommy Robinson, is a former British National Party member jailed for a year for assaulting an off-duty police officer. The EDL website states that the group takes “an actively anti-racist and anti-fascist stance”, with “people of all races and faiths” invited.

The revelations about Robinson’s racist, violent past come on the anniversary of the EDL’s formation, and follows an investigation by the anti-Fascist magazine Searchlight. Robinson, real name Stephen Yaxley-Lennon, joined the BNP in 2004.

In the same year he assaulted an off-duty police officer who intervened to stop a domestic incident between Yaxley-Lennon and his partner Jenna Vowles. During the scuffle Yaxley-Lennon kicked the officer in the head.

He was convicted on 18 April 2005 for assault occasioning actual bodily harm, for which he was sentenced to 12 months’ imprisonment, and assault with intent to resist arrest, for which he received a concurrent term of three months.

The revelation that Robinson had been a member of the BNP explains why so many of the initial EDL activists also attended BNP meetings in the Luton/Bedford area. More importantly, it dispels the myth that the roots of the EDL are not in hard-core racism.

It destroys the protestations by the EDL leadership that, “They aren’t the BNP and they aren’t Nazis,” made at their phoney press conference held last September in a disused Luton warehouse, where they unfurled a swastika flag and proceeded to try to set it alight for the cameras.

In September, Left Foot Forward reported on the confrontations between the EDL and anti-racism campaigners at EDL demos in Harrow and central London:

Elsewhere, the Mirror reports that BNP leader Nick Griffin is lining up his daughter as his successor, just as Jean Marie Le Pen has done in France. It says:

Party insiders say Griffin has quietly boosted 24-year-old Jennifer’s role, giving her huge influence over membership and finance. But they believe Griffin has no intention of ­relinquishing his vice-like grip on the ­party he has led since 1999 – ­despite his pledge to step down by 2013.

They expect him to copy his 82-year-old French ­Fascist ally Jean Marie Le Pen, who has ensured his daughter Marine is in pole position to replace him as head of France’s National Front. Last year Jennifer was appointed a director of Adlorries, a company that controls a substantial ­proportion of the BNP ­finances, under her married name Jennifer Matthys…

Jennifer, who was leader of the BNP’s youth wing as a teenager, has been at her father’s side at impor­tant party events. ­Earlier this month she was used as the public face of the party in a promotional film.

Griffin’s manoeuvring risks sparking further revolt among the party faithful, who have openly questioned his leadership since the BNP was humiliated in May’s ­national and local ­elections.

• HOPE not hate are holding a Day of Action this Saturday (July 3rd), campaigning against the BNP ahead of the Goresbrook ward by-election in Barking & Dagenham on Thursday (July 8th) – for more details of how to help please click here.