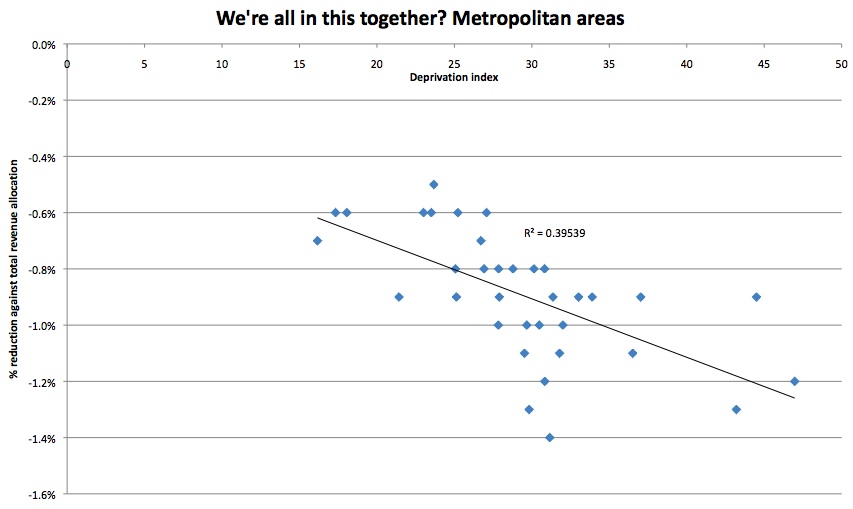 This story is jointly written by Will Straw and Tom Phillips

George Osborne is fond of saying that, “We’re all in this together”. But after this week’s regressive Emergency Budget, Left Foot Forward can reveal that local spending cuts announced last month will hit the poorest areas in the UK the hardest.

According to George Osborne, Tuesday’s Emergency Budget was “progressive”. But analysis by the Financial Times, Next Left, and Tim Horton and Howard Reed for this blog has dissolved this myth.

New research by Left Foot Forward shows that contributions to last month’s £6.2 billion in spending cuts from local government are similarly regressive, exposing the Lib-Con coalition as willing to leave the least well off in society behind on their road to recovery.

David Cameron’s constituency, which lies in Oxfordshire, will only receive half the level of cuts that the considerably more deprived South Tyneside – home to David Miliband’s South Shields constituency – will suffer.

The graphs below, which plot cuts to local authority budgets against levels of deprivation, show that the poorest Metropolitan districts and London Boroughs stand out as the real losers.

The Indices of Deprivation from the Department of Community and Local Government scores the level of deprivation in each local authoritative district. The most deprived areas in the country – such as Knowsley, Liverpool, and Manchester in the North-West – are being affected with some of the highest percentage cuts. The trendline for Metropolitan areas is particularly robust. The result shows that percentage revenue reduction increases progressively with the level of deprivation.

Graph 2, below, shows that the news is not much better for the deprived in the Capital. Because of the recent conversion of some county councils to become unitary authorities it was not possible to make similar robust comparisons for these two other types of local authorities. But the county council of Oxfordshire, home of David Cameron’s Witney constituency  has a deprivation index of 10.85 and cuts of 0.7%. By contrast, Nick Clegg’s Sheffield has 27.84 and 1.0%, Ed Miliband’s Doncaster has 30.84 and 1.2%, while David Miliband’s South Tyneside is worse hit with 31.16 and 1.4%.

The raw data we used is available here.

32 Responses to “Deprived areas to be hit hardest by cuts”