David Miliband has today backed calls for a High Pay Commission. He becomes the third leadership candidate to do so after his brother, Ed, and Diane Abbott. 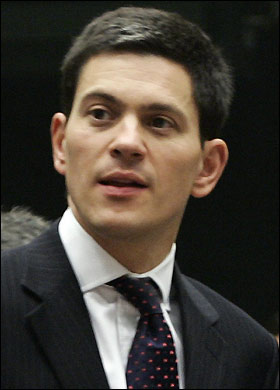 The front runner in the Labour leadership election, David Miliband, has come out today in support of a High Pay Commission to investigate the “explosion in top corporate pay”. He follows his brother, Ed, and Diane Abbott as the third leadership candidate to support the campaign led by the Compass pressure group.

Mr Miliband, who yesterday topped a poll of Labour party members carried out by Labour List, calls for a limit to the number of boards that an individual can sit on, and for democratically accountable employees to be represented on the remuneration committees of firms.

“The average ratio of boss-to-worker pay among FTSE 100 companies has reached 66:1 – with executive pay and bonuses far outstripping firm performance in the 1990s and 2000s. The impact of this on pay inequality was always a moral concern, but its contribution to the credit crunch was economically catastrophic.

“I have supported calls for a High Pay Commission to investigate what’s been driving these trends. But we need a solution, not just a process. And I think an important part of that solution lies in spreading power, transparency and accountability within companies. Decisions that are currently taken by an elite in the shadows need to be opened up and brought out into the light.”

Ed Miliband endorsed the idea of a High Pay Commission in a speech in Leeds last week. He said:

“The differentials of 80, 100 or more between those at the top of a company and those at the bottom are just too high. And we should say it. Some people will say that the market justifies this. Personally, I don’t believe it because many of these rewards come from cosy remuneration committees where the chips are stacked on one side.”

Diane Abbot was the first leadership candidate to endorse the calls for a High Pay Commission when she signed Early Day Motion 191 in the last parliament.

Full disclosure: I signed the letter to the Guardian last August calling for the High Pay Commission, which was organised by Compass.