The Coalition Government has been keen to express sympathy for those facing unemployment. But in contrast to these sentiments, the Government's main labour market policy so far has been to cut support for unemployed people. 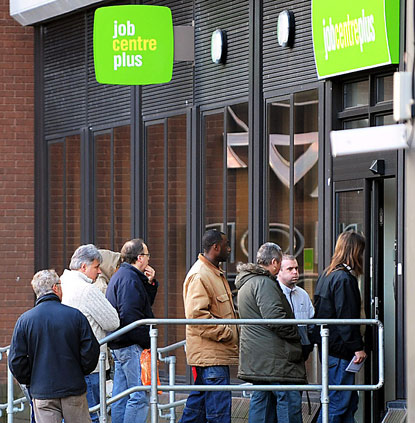 The Coalition Government has been keen to express sympathy for those facing unemployment. On Wednesday, Prime Minister David Cameron discussed the tragedy of rising worklessness, and Employment Minister Chris Grayling has talked extensively about helping the ‘forgotten millions‘ of unemployed workers into jobs. But in contrast to these sentiments, the Government’s main labour market policy so far has been to cut support for unemployed people. Cuts announced yesterday and last month now total £1.285bn and include:

• Cuts of £290 million from the Future Jobs Fund, which provides paid employment for unemployed young people. The cut will mean a loss of 94,000 jobs for 18-24 year olds facing long-term unemployment.

• Cuts of £30 million from the ‘golden hello‘ scheme which offered a subsidy of £1,000 plus help with training costs for businesses that employ someone who has been unemployed for over 6 months. This scheme will now close nine months early, and will cease to operate at the end of this month.

• Cuts of £450 million from the Young Person’s Guarantee, a promise to all unemployed young people that if they were out of work and claiming JSA for six months they would be guaranteed a job (via the Future Jobs Fund), a training place or work experience. This guarantee will now not be extended beyond the current financial year, and will cease to operate in March 2011.

• Cuts of £515 million from the two year Jobseeker’s Guarantee, which promised every adult who had been out of work and claiming JSA for two years a guaranteed offer of a job, internship, volunteering placement or work experience. It now appears that the Guarantee will now be completely cut.

Although over £1 billion has been cut from welfare to work programmes, the Coalition claim that a new ‘Work Programme‘ will meet the needs of unemployed workers. But there are several flaws in this argument. Crucially, while Ministers are seeking to ‘move quickly’ on setting up the new programme, indications from DWP are that the earliest it will be available is Summer 2011. There are 2,472,000 people unemployed now – and the impact of the Coalition’s cuts will be that significantly less support is available to them (and any others who lose their jobs) over the next year.

In addition, the Work Programme is essentially replacing the existing Flexible New Deal initiative, which refers unemployed people to private contractors for support with seeking work. The experience provided by the Future Jobs Fund and the Guarantees were in addition to existing New Deal measures – and as no details are available on the level of funding that will be available for the Work Programme, it seems likely that even when it is introduced overall levels of investment in tackling unemployment may fall.

The Guarantees also promised real experience of real jobs – demand-led interventions which evidence shows provide the best outcomes when unemployment is high and jobs are limited. While the Work Programme will provide training and support, this type of intervention is no substitute for a Job Guarantee as a means of preventing long-term worklessness. There is also increasing evidence of private contractors ‘creaming’ the easiest to help clients, and ‘parking’ those who need the most investment and resources – the worst off are likely to receive the worst service.

Finally, the cuts in support go futher than programme cuts announced so far – a whole range of other welfare programmes were due to be introduced this year, and have now been put on hold. These include the second phase of the roll out of Flexible New Deal 2 and the Community Task Force. While there was much to question in the design of these programmes (the Community Task Force in particular closely resembled a workfare scheme for young people who were long-term unemployed) they did represent real investment in tackling unemployment, money that will no longer be spent on supporting unemployed people this year.

Unemployment remains at levels that were last seen in early 1990s. For all the fine sentiment, it looks as if the Coalition is basing its labour market policies on a similar period. Unfortunately, with less than one job for every five jobseekers, it will be hard for the unemployed to get on their bikes.

19 Responses to “Coalition cuts are bad news for jobseekers”