As ever at these occasions, the choreography was exquisite. David Cameron's first European summit as British prime minister was always going to be of intense interest to the media... 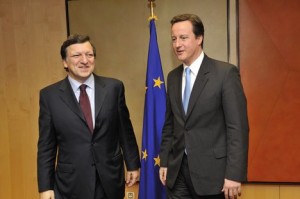 Our guest writer is Glenis Willmott MEP, Labour’s leader in the European Parliament

As ever at these occasions, the choreography was exquisite. David Cameron’s first European summit as British prime minister was always going to be of intense interest to the media. Yet in the end, yesterday’s event looked very much like the many that have gone before it. That’s partly because most of the business is sorted out well in advance of the leaders’ arrival.

But it’s also because that’s what international diplomacy demands – it’s in everyone’s interest to head home looking statesmanlike. Here’s a quote from how Cameron sums up the summit’s conclusions on bank levies and a financial transaction tax:

“We do not want to have some sort of Europe-determined bank levy with a specific use of funds. The text talks about – and I quote – introducing systems of levies and taxes, which actually referred to ensuring fair burden-sharing. That is absolutely the approach that we wanted this to take.”

Look elsewhere and you get a different take though. Colleagues tell me that German TV news last night hailed Angela Merkel for her success at the summit. And what was Merkel’s win? They report how she persuaded a sceptical British Prime Minister to change his position and to sign up in favour of a financial transaction tax. Based on the text, either interpretation could be accurate.

That’s the key to summits: you don’t embarrass world leaders. The detail will be ironed out later by diplomats and ministers when they come to debate each individual dossier, so the real battles are yet to come. What can we learn from the summit? Well, I suspect that we can already discern how Cameron will deal with these events. It’s a system that has served British prime ministers, both Tory and Labour, for many years.

First, identify a threat looming on the horizon. Find a dragon to be slayed by St George: in this case all the talk of the European Commission vetting the budget before it is announced to parliament. Second, mark out your red lines, which you already know are unlikely to be crossed. Then, go to the summit and agree a lengthy document that has already been stripped apart and put back together by teams of diplomats. Ensure that anything contentious is qualified with phrases like “taking account of national budgetary procedures”.

Ive got a union background, so I know negotiating tactics when I see them. But whats interesting about this example is the fact that this isnt about winning against the other EU leaders. Its all about getting the upper hand over Britains band of eurosceptics, the press certainly,  but also Cameron’s own back benches. It is clear that the Tory leader wants to calm the fears of our EU neighbours by demonstrating that he is willing to work with them.

But it was telling that of all the leaders at yesterday’s event, Cameron felt closest to the European Commission President José Manuel Barroso. That’s partly because both men are ideologically similar – at least economically. Both want to see the state cut back, with a focus on deregulation and leaving more to open markets.

Crucially though, it’s also because Cameron is no longer a member of a mainstream political family. Having spurned the EPP, Europe’s mainstream centre right grouping, he had no one to meet when other leaders got together with their opposite numbers from sister parties. Instead he had to meet Michal Kaminski, the MEP who leads the political ragbag of parties with which the Conservatives now sit in the European Parliament.

Cameron is still paying for having left the EPP. It means he has to work harder to get his point of view listened to – not in the summit, but in the corridors and backrooms where the real battles are won.

4 Responses to “Cameron plays the statesman in predictable Brussels affair”