Overall, this was a Budget that seems highly likely to lead to rising unemployment. 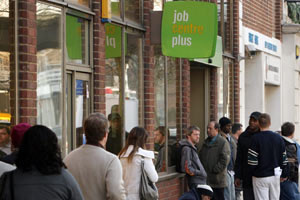 Last week’s Budget focused on reducing the welfare bill as a means to reduce Government spending. But tough talk on benefit claimants doesn’t create jobs. And all the signs are that this was a Budget that was bad for unemployed people and bad for employment. The economic forecasts produced by the OBR show claimant unemployment 100,000 higher during 2011-2014 than was the case in their pre-budget analysis.

Their forecasts also show ILO unemployment rising above previously forecast rates. As the OBR’s analysis does not take account of measures to be announced in Autumn’s Spending Review, it also seems unlikely that it fully accounts for forthcoming public sector job losses – which CIPD have estimated will total 750,000.

In addition, the OBR’s claimant count figures do not yet fully include the large numbers of people that the Government are proposing to move from income support (lone parents) and incapacity benefits (disabled people) onto JSA and the employment impacts of cuts to Tax Credits (which will affect many families’ childcare costs) do not appear to have been considered

And it’s also worth remembering that even this gloomy labour market picture is based on significant increases in British exports and consistent economic growth – were the spending cuts announced last week to slow recovery, as many economists fear, the job loss figures would be likely to soar further still. Overall, this was a Budget that seems highly likely to lead to rising unemployment.

But what about measures to create employment opportunities? While the Government line has so far focused on encouraging claimants to get a job, the economic facts show that at present this is simply not possible for most unemployed workers – nationally the ratio of unemployed people to jobs is 5:1, and in many local areas job prospects are far worse.

The Budget’s main proposal on creating work was a one-year National Insurance holiday targeted at new employers starting businesses in specific regions. But as my colleague Richard Exell has shown, the last time a similar policy was tried only 2,000 jobs were created and the DWP’s evaluation found that only a quarter of employers had heard of the programme.

Last week, the IFS concluded that the current Government’s proposal was “complicated and open to abuse by firms looking to save money through tax”. They stated that:

“The only good thing you can say about it that it won’t last that long and won’t, because it is relatively small amounts of money, do that much damage.”

Crucially, it’s not national insurance contributions that determine whether or not someone starts a business – if there is no demand in local economies, there is no reason for employers to create jobs. Wages and start up costs are a far greater business risk than a year’s worth of NICs – at the moment evidence suggests that the most likely outcome is for take up of the scheme to be low, and for deadweight costs will be high.

Slightly most positive employment measures are the creation of a Regional Growth Fund to fund regional capital projects in 2011-12 and 2012-13 and the Government’s commitment to the creation of a Green Investment Bank. But no details are provided in the Budget on the size of the Fund or the Bank, and the likelihood of them being limited in value seems high.

In addition, cuts in investment allowances for small manufacturing companies have been criticised by unions and employers’ organisations. Combined with cuts in key manufacturing loans – including Sheffield Forgemasters – the Government’s job creation strategy seems at best limited, and at worst non-existent. The EEF’s Budget Response stated that:

“Manufacturers…will now be left wondering where the necessary growth and investment will come from, given the cuts to investment allowances and capital budgets.”

Instead of intervening to support job creation, the Government seems to be relying on free market orthodoxy to enable the private sector to create a swathe of new jobs across the country – given this failed to happen during ten years of strong economic growth, the prospects of success now seem limited.

At the same time as job creation measures are being scaled back, support to help jobseekers move into work has also faced significant cuts. The Future Jobs Fund, the Jobseeker’s Guarantee and the Young Person’s Guarantee have all been scrapped – and support for long-term unemployed people now appears to amount to a suggestion that they should get on their bikes and move somewhere else (although the precise location of large numbers of employers keen to take on people with experience of long-term worklessness has not been specified).

The value of benefits is also being cut which will make jobsearch harder (£65 is not much with which to survive and pay for the additional costs of looking for work) and will exacerbate the poverty already faced by unemployed people.

Overall, the Coalition’s approach seems to be to blame those out of work for their predicament – rather than recognising the multiple barriers to employment that those who are furthest from the labour market face, and the key fact that the vast majority of unemployed people want a job but can’t find one. With prospects for new job creation looking poor, this was a budget that provided little hope to the UK’s 2.5 million unemployed people.

12 Responses to “A bad Budget for jobs and for jobseekers”