Mr Brown's upbringing, his moral compass, explains his consistent political identification with the underdog and the poor - unlike Mr Cameron. 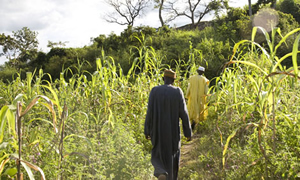 International development has not grabbed the headlines in this election – and that’s a great shame, because not only has it meant a worrying lack of scrutiny of the Conservative Party’s aid policies, but it has hidden from view one of Labour’s most progressive and positive achievements of the last 13 years. The Sky Leaders’ Debate on foreign policy contained no question on international development, despite the department for international development (£5.2bn) having a greater budget than the Foreign and Commonwealth Office (£1.9bn).

The questions surrounding the Conservatives’ policies on development, which we scrutinised back in January, remain unanswered. Cameron has made ring-fencing the aid budget exhibit A of his attempts to prove the Conservatives have shed their ‘nasty party’ image, but the devil is in the detail – not only in how much they will spend, but what on.

Despite their claims to match Labour and the Liberal Democrats on spending 0.7 per cent on aid by 2013, they have continually refused to guarantee that any aid for climate change adaptation would be additional, and not raided from the existing budget. This is a key demand of the NGOs who make up BOND (the main grouping of British international NGOs), and was raised with Conservative shadow minister Andrew Mitchell at their AGM in February.

Mitchell was on a panel with international development secretary Douglas Alexander and Michael Moore of the Lib Dems; download the transcript (well worth reading in full). Whilst Labour have committed to make 90 per cent of aid for climate change additional, and the Lib Dems 100 per cent, Mitchell would only say (p10):

“Until you see what progress is made of Copenhagen I think it’s very difficult to give a judgement of that.”

In response, the NGO director asking the question replied (p11):

“I couldn’t vote for a Tory government because there is no commitment there. That 0.7 could be used for climate finance bills, the 150 billion warps the aid budget. Military spending in somewhere like Afghanistan, you know I think the Tories are talking about including some of the peacekeeping in the ODA budgets. I think that’s entirely wrong and untransparent…“

In addition, eyebrows were raised when the Conservatives announced plans to create a ‘National Security Council’ with aid experts concerned this would divert aid money into the MoD whilst muddying the boundaries between military and humanitarian work. Save the Children told Left Foot Forward they are:

“Very concerned that the Conservatives’ security spokesperson…left open the possibility of significant aid funds being diverted into stabilisation units.”

Cameron has said the Conservatives would abide by OECD rules when matching the 0.7 per cent aid commitment, but this would not prevent ODA from being used in some military operations, and could go against the 2002 International Development Act which requires DfID it prove that its spending is likely to contribute to poverty reduction.

Then there are the unanswered questions about what the Conservatives would spend their money on. Since we reported on these concerns in January, leaders of the Make Poverty History campaign have been among the aid experts to criticise the Tories on their plans. In a letter to The Observer recently, they wrote:

“Access to basic services like health and education are basic rights. Conservative proposals to distribute vouchers for private schools in slums, to create an X-Factor-style competition to decide who gets aid, and a shift to private provision of healthcare, look like crude attempts to export failed ideological or populist policies, against the advice of leading practioners and aid charities.”

At the BOND AGM, Andrew Mitchell attempted to defend their ‘My Aid’ X-Factor style competition by claiming it was “a tiny amount of the budget” (p23). In fact, his green paper specifies that this fund would be £40m, almost as much as our entire annual aid to Zambia. How can he claim it is a “very small amount of money” while at the same time creating so much noise about cutting a £50m grant to China that is already being phased out?

Labour’s trebling of overseas aid provides a stark contrast with the Conservatives, who halved the aid budget when they were last in power. OECD figures released in the midst of this election campaign on April 13 showed a 14.6 per cent real terms increase in UK aid, putting aid at an estimated 0.6 per cent of gross national income and on course to meet the 0.7 per cent target by 2013, despite the recession.

Labour was legislating on international development policy right up until the election was called, first with the tabling of the draft legislation to enshrine the UK’s commitment to 0.7 per cent in law, then with the announcement on International Women’s Day of a new role in Government leading on combating violence against women around the world, and then with the passing of two bills through ‘wash up’ – the first a bill on debt relief targeting Vulture Funds (despite Tory attempts to ruin it), and the second the passing of anti-bribery legislation which creates a new offence of bribing a foreign public official and a corporate offence for companies that fail to prevent bribery.

And the centrality of international development in Labour and Brown’s foreign policy were plain for all who were present at his recent ‘GB on the road’ event on ‘Britain’s place in the world’ – his entire speech addressed development. Watch it here:

In what is widely regarded as his most rousing speech of the election campaign, Brown said on Monday:

“Do you know what taught me more than any book ever taught me, it was a video. It was a video created for the Make Poverty History campaign.”

In addition to enshrining our 0.7 per cent aid spending in law and providing additional aid for climate change adaptation, Labour pledges in its manifesto to continue to lead global initiatives on access to health, education, food, water and sanitation and women’s rights. It is disappointing that there is no concrete commitment to a Financial Transaction Tax, as proposed by the Robin Hood Tax campaign and supported by Left Foot Forward, but in their submission to BOND’s joint demands (p9), Labour claim to have “already called on the IMF to investigate the feasibility of a range of mechanisms including a Financial Transaction Tax and global levies”, and that they “will remain committed to taking forward this agenda and working with international partners to find consensus”.

As many anti-poverty campaigners have long argued, trade can lift millions out of poverty. It is therefore encouraging to see Labour committed in its manifesto to “quadruple funding for fair and ethical trade”, and to “press for a fair World Trade Organisation deal, with no enforced liberalisation for poor countries, and increased duty-free and quota-free access”.

However, whilst Labour’s support for Fairtrade is commendable, little progress has been made on pushing the EU and WTO to make trade fair in the five years that have passed since Labour last committed to trade justice in its 2005 manifesto. If Labour is re-elected, more political capital must be spent on trade if there is to be any movement in the Doha ‘development round’.

Who is Africa’s preferred UK premier?

Closer inspection shows that consensus between the Conservatives and Labour on international development is a myth. This is a big choice election. As one African newspaper, Kenya’s Daily Nation, said:

“Britain is now set to choose who between the two should be their prime minister…It doesn’t speak well of the frivolity of today’s media-hyped politics that the guy with the dash may actually get voted in.

“But if Kenya and Africa were to join the voting, there would be no doubt whatsoever as to their preference.”

Mr Brown’s upbringing in a family of devout Scottish Presbyterians forms the basis of his moral compass. It is this compass that explains his consistent political identification with the underdog and the poor.