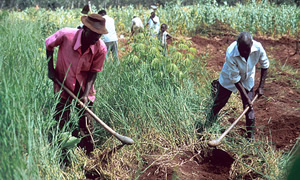 Did you know that African governments raise 11 times more money from taxation than they receive in overseas aid? This fact, contained in the African Economic Outlook report published yesterday by the Organisation for Economic Co-operation and Development (OECD), United Nations and African Development Bank, puts the aid debate into perspective.

The headline figure masks a stark difference across the continent. Aid income still exceeds taxation in a quarter of African countries, and in half of them it constitutes over a third of government revenue. Most African countries that don’t depend on aid have high tax revenues from oil or other natural resources.

In the UK there’s a welcome and solid political consensus around increasing our aid spending to 0.7% of Gross National Income (GNI) by 2013, a commitment included in the Government’s coalition agreement. All the parties also want to see this money spent in ways that will in the long term allow developing countries to realise their aims to move away from aid, but on paper at least, they have differing views on the importance of tax in achieving this.

As the African Economic Outlook argues, ending aid dependency means improving tax revenues. This requires action on two fronts in particular: strengthening tax policy and administration in developing countries, and putting in place international rules to reduce tax avoidance and evasion; it is therefore disappointing that the full coalition programme makes no mention of tax within the full page it admirably devotes to international development.

This is particularly interesting because of the stark difference between the two parties’ manifestos on this subject. While the Conservatives made no mention of tax in their international development chapter, action on tax was one of the Liberal Democrats’ eight commitments in that area. Here’s hoping that the omission of this point from the coalition document was not deliberate.

Free marketeers like the Adam Smith Institute argue that higher taxes reduce economic growth, and public spending ‘crowds out’ investment. Many go as far as to say that tax havens increase growth precisely because they reduce effective tax rates. A recent ASI briefing is one such example. It cites an OECD paper as evidence that taxes impede growth, but on close reading, that paper is a bit more nuanced.

“At a low level, the productive effects of public spending are likely to exceed the social costs of raising funds. However, government expenditure and the required taxes may reach levels where the negative effects on efficiency and hence growth starts dominating.”

Finding the ‘right’ amount of tax for the UK, which raises taxes amounting to 36% of GDP, is therefore a genuine debate, but it’s hard to argue that the tipping point has been reached in developing countries, where the average figure is just 15%.

The Conservative manifesto asserts that “trade and economic growth are the only sustainable way for developing countries to escape poverty”, and its key aim is “to make sure everyone gets access to the basics: clean water, sanitation, healthcare and education” – there is an implicit argument for the centrality of improved taxation in developing countries.

Economic development requires a functioning state that is able to educate its workforce and keep it healthy, enforce the rule of law, and provide the infrastructure needed by business. Governments can’t do that without taxes.