Tactical voting is being encouraged by Labour Ministers and left-wing newspapers. In 81 of 116 Tory target seats, a tactical vote means a vote for Labour. 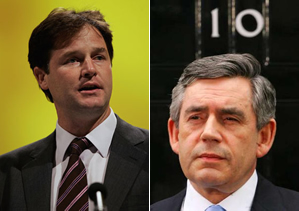 Ed Balls and Peter Hain have both urged voters to vote tactically this morning to prevent a Conservative government. Left-leaning newspapers, like the Daily Mirror and Polly Toynbee and Jonathan Freedland in the Guardian, have also encouraged tactical voting. The reality is that in nearly three out of four Tory target seats, a tactical vote means a vote for Labour.

The difficulty for progressives is that support for the Liberal Democrats – encouraged by the Guardian and Observer – is tipping the balance between a hung parliament and a Conservative government. An Ipsos-MORI poll of marginal seats published yesterday looked at voting intentions in 57 Labour-held constituencies where Tories need a swing of 5 to 9 per cent to win. They project Labour and Conservative to be tied on 36 per cent with the Lib Dems on 20 per cent – enough for Political Betting to say that it “points to Tory majority of 2”.

Entirely unreported are the 2005 results, which Ipsos-MORI publish in their nine page accompanying document: “Conservatives 31%, Labour 45%, Liberal Democrats 17%, Other 7%”. In these marginal seats, the Tories have only gained 5 points while Labour has lost 9 points including 3 points to the Liberal Democrats. Under our bankrupt electoral system, these Labour-Lib Dem switchers are effectively handing power to the Tories. Unless the Tories’ haul of seats falls below the psychologically important 300-mark, David Cameron seems intent on breaching convention and leading a minority government.

Any voters who are confused about how to “Stop Dave” can visit this helpful website and enter their postcode can use the Daily Mirror‘s guide to tactical voting while the “Torymergency!” website sort out a couple of bugs.

Thanks to Lib Dem commenter, Duncan Stott, who points out that the Lib Dem surge can help knock out the Tories in a series of Lib Dem target seats including Oliver Letwin in Dorset West (2.3 per cent swing required) and Liam Fox in Somerset North (5.9 per cent swing needed). There are also a series of seats where tactical voting for Labour could kick out incumbent Tories.

38 Responses to “The truth about tactical voting”