"Currently, every coachman and every waiter is debating whether relativity theory is correct" - said Einstein; there are striking parallels with climate denial. 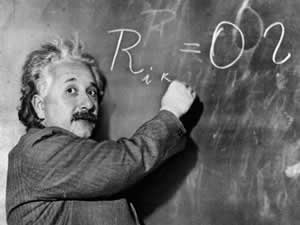 “This world is a strange madhouse. Currently, every coachman and every waiter is debating whether relativity theory is correct. Belief in this matter depends on political party affiliation.” – so wrote Albert Einstein in a letter to his one time collaborator, the mathematician Marcel Grossmann in 1920.

Jeroen van Dongen of the Institute for History and Foundations of Science at Utrecht University in Holland, writing in a recent edition of the journal ‘Studies in History and Philosophy of Modern Physics’, describes the effectiveness of the movement that grew up to oppose Einstein’s theory. There are some striking parallels with today’s climate debate.

At a time when The Guardian just reported another poll showing a drop in concern about climate change, and a New York Times front page this week described Britons’ growing doubts about the science, it is worth taking a look at that anti-science campaign, which was waged by Einstein’s critics because like today’s climate denial movement, the anti-relativity movement had some success too.

“Anti-relativists… built up networks to act against Einstein’s theory in concert. This led to some success. For instance, the clamour about the theory in Germany contributed to the Nobel Committee’s delay in awarding its 1921 prize to Einstein and to the particular choice of subject for which he finally did receive it: his account of the photo-electric effect, instead of the controversial theory of relativity.”

“Anti-relativists were convinced that their opinions were being suppressed. Indeed, many believed that conspiracies were at work that thwarted the promotion of their ideas. The fact that for them relativity was obviously wrong, yet still so very successful, strengthened the contention that a plot was at play.”

“Conspiracy theories tend to do well in uncertain times: they create order in chaos… Just as there is no real point in debating conspiracy theorists, there was no point in explaining relativity to anti-relativists…

“Their strong opposition was not due to a lack of understanding, but rather the reaction to a perceived threat… Anti-relativists were convinced of their own ideas, and were really only interested in pushing through their own theories: any explanation of relativity would not likely have changed their minds.”

Despite the well-intentioned efforts of some climate scientists like Professor Rapley of the Science Museum, it’s not apparent that a repeated explanation of the basics of climate science is what will help in the face of the latest disinformation campaigns on global warming.

It is not a surprise that public concern about climate change should have been dented following such a fierce media and smear campaign by a coalition of fossil fuel industries (well documented in the case of Koch industries and Exxon) and conservative ‘think tanks’ (covered extensively by Desmogblog and Climateprogress in a US context, and exposed to a less extent in the UK) which have peddled disinformation for decades to deny this fact.

As the US blogger David Roberts wrote for Grist in response to separate polls on US public opinion in relation to global warming:

“Polls about climate science get treated like the results of some contest between two ideological interest groups. It becomes a horserace story – ‘Democrats/environmentalists are losing’ – rather than a story about danger to public health.

“It’s about environmentalists’ failure to persuade rather than the anti-scientific obscurantism that’s completely overtaken the Republican party, with financial support from large corporate interests…

“If I can’t convince a guy standing in a downpour that it’s raining, seems to me the dumb ass in the rain is the story, not my poor messaging.”

Who can disagree with Roberts’ conclusion?

“It may be helpful to understand these affective responses of the public, but they are no substitute for science and pragmatism in policymaking. Ultimately leaders are going to have to acknowledge the problem and deal with it. Waiting until all the polls line up is a gutless dereliction of duty.”