Voters descended on Parliament Square today to express their support for a hung parliament and displeasure with the scare tactics of the right-wing tabloid press. 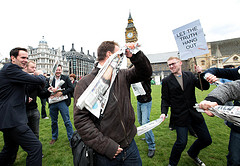 Voters from across London descended on Parliament Square today to express their support for a hung parliament and displeasure with the scare tactics of the right-wing tabloid press.

In what was billed the “biggest rolled-up newspaper sword fight ever” by the facebook organisers. The ‘Flashmob’ protest was organised by word of mouth, through facebook, the email lists of online civil society groups Avaaz and 38 Degrees and on blogs, including this one.

Over 30,000 people have signed a petition calling for Rupert Murdoch and the British tabloid press to, “stop spreading fear and trying to manipulate how people vote.” Voters can add their name here.

After the event, Paul Hilder from Avaaz and David Babbs from 38 Degrees spoke to Left Foot Forward. Paul Hilder said, “people vented their passions, their anger at the fact that tabloid newspapers are really trying to drag down this election, drag down this country, scaremongering about the prospect of a coalition government where politicains work together”. David Babbs said: