The Times has spiked a story that would have caused embarrassment to David Cameron. Baroness Warsi said Muslim MPs don't have "morals or principles". 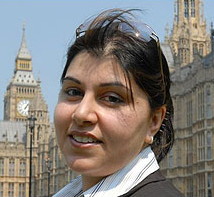 On the eve of the general election, The Times has spiked a story that would have caused embarrassment to David Cameron. According to Next Left, an article filed by Andrew Norfolk, Tom Baldwin and Richard Ford reported remarks by Baroness Warsi on the lack of “morals or principles” of Muslim MPs. It has not made today’s paper.

Speaking at an event in South Yorkshire in English and Urdu, Sayeeda Waarsi – David Cameron’s handpicked Community Cohesion Shadow Minister – is understood to have been responding to comments by an earlier speaker who urged more Muslims to become involved in politics. She said:

“[He] says we need more Muslim MPs, more Muslims in the House of Lords. I would actually disagree with that because one of the lessons we have learnt in the last five years in politics is that Muslims that go to Parliament don’t have any morals or principles.”

A prominent Conservative businessman, who asked not to be named, said her words were “a disgusting insult to all Muslims at a time when we need to play a bigger and more positive role in British society”.

Sadiq Khan, defending Tooting for Labour, was not at the reception but reacted with anger to Lady Warsi’s attack. “These comments will cause huge offence to every single candidate of Muslim faith standing for any party at this election, as well as the tens of thousands of people of all faiths and none who have voted or will be voting for us,” he said.

Baroness Warsi claims that her remarks had been mis-translated but in the spiked article, The Times reports that the party acknowledged “this may not have been the best way of making her point”. A Sheffield paper, ILM, confirmed to Left Foot Forward this morning that they had a recording of the remarks.

I’ve just seen this Guardian report which provides a different transcript to that seen by Next Left and myself:

“I would actually disagree with that because one of the lessons we have learned in the last five years in politics is that Muslims that go to parliament don’t have any morals or principles. Not everyone is [former Labour peer] Lord Ahmed, not everyone puts their community before their own career.”

I can only assume that this is the Conservative party’s transcript which they said they would send me earlier but which failed to materialise. I received a call from a Tory press officer this morning who disputed the translation of the Urdu word “asool”. It did not, she asserted, translate as “morals” but rather as “principles”. UrduWord.com confirms that this is correct so at her suggestion, I am happy to amend the headline.

The Guardian also report that, “Another website, Left Foot Forward, said it had seen the Times article. The website initially reported that the Sheffield Urdu and English newspaper Mahana ILM had confirmed it held a recording of Warsi’s comments. But when contacted by the Guardian, Mahana ILM denied any knowledge of Warsi’s comment, and the reference to the recording was subsequently removed from the Left Foot Forward story.” This is patently wrong as I stand by my conversation earlier today and have not changed the story.

113 Responses to “Senior Tory: Muslim MPs “don’t have any principles””