In the Queen's speech today, the Coalition will unveil plans to create 2,000 new academies. 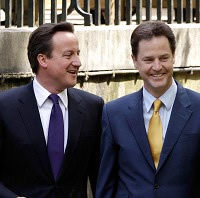 The new Coalition Government will unveil plans to create 2,000 academies in the Queen’s speech today. The Guardian reports 500 secondary and 1,700 primary schools the freedom to become academies as soon as the summer. The Conservatives believe academies promote social justice and can give working-class parents greater choice, and will also say successful city academies can take over failing schools. The Telegraph reports that the Government’s priority will be to “reduce the deficit and restore economic growth” and to “accelerate the reduction of the structural budget deficit”, including five Treasury bills: including ones to block the planned rise in employers’ National Insurance contributions; to return supervisory powers over the City to the Bank of England; and to set up an Office of Budget Responsibility to remove the power to make economic forecasts from the hands of politicians.

On political reform, the Telegraph adds: “The main themes of the address are expected to be ‘freedom, fairness and responsibility’, with a ‘great repeals bill’ to get rid of Labour legislation opposed by the Tories and Lib Dems when they were in opposition. A Parliamentary Reform Bill is expected to usher in a shake-up of the political system, with measures to provide for fixed-term parliaments and powers to enable voters to get rid of MPs found guilty of serious wrongdoing.” And the Standard claims the Queen’s speech will include “an energy security and green economy Bill, and a police reform and social responsibility Bill, which could introduce elected police commissioners”.

The Times reports the prime minister’s “surrender” in his dispute with the Conservative Party’s backbench 1922 Committee. Under pressure, he has backed down from his demand for ministers to have a say in the running of the committee, having argued for the change “on the ground that he wanted the parliamentary party to remain united during the tests imposed by the coalition Government”; last week 118 MPs – nearly 40 per cent of all Tory MPs – voted against his plans. The Times says the PM may now “faces claims that he lost an early trial of strength with his internal critics after being warned that he could not stop the election of a vocal opponent”. The Independent describes David Cameron’s actions as necessary to “soothe a festering row” with his backbenchers. It says: “Mr Cameron denied he was “picking a fight” with his backbenchers, but insisted it was better for the party to pull together – particularly as the coalition government faced daunting challenges. He said: ‘I think it is much better to have one organisation in the party which has one mind and – to coin a phrase – we are all in it together’. But the party leadership has been taken aback by the ferocity of some MPs’ reaction to the move. Mr Cameron was said last night to accept it would be ‘illogical’ for ministers to vote in elections for the post regarded as the Tory backbench ‘shop steward’ and to regard his proposed compromise as fair.”

The Times also reports Nick Griffin’s resignation as leader of the British National Party. Griffin will stand down in 2013 in “an attempt to thwart a BNP coup”; he hopes it will see off an immediate leadership challenge following the Fascists’ disastrous showing in the local and general elections. Dan Hodges, a spokesman for Searchlight, told the Times that the announcement was a stalling tactic; he said: “This isn’t a resignation, this is a pretty transparent attempt by Nick Griffin to play for time and shore up his position as the leader… It is a very naked effort to deflect the growing criticism of him and his disastrous election campaign.” While Margaret Hodge, who crushed Griffin by 18,000 votes in Barking, said that it was a desperate attempt to cling to power, “but we so demoralised them that he will probably implode anyway”.
The Independent adds that Griffin “told a post-poll strategy meeting that the timing was to allow him to complete work on the party’s administrative and political machine before handing over to a younger successor with less “baggage”, and so that he could concentrate on being re-elected to the European Parliament in 2014… The BNP failed to win a single Commons seat despite fielding more than 300 candidates, and could only increase its overall vote by 1.8 per cent to 514,819. Its number of council seats was more than halved to 19, with 27 of the 29 up for re-election on 6 May losing their places.”

All the papers report on the £6 billion of cuts unveiled yesterday morning. The Times reports on the impact on Scotland, where £1bn of the £6.2bn will have to be found, after the Holyrood elections next year, to be implemented within 12 months of the new Scottish government taking power. It says: “Scotland’s share of that comes through the negative operation of the Barnett Formula and will see a £332 million reduction in the devolved Budget north of the Border in 2011/12 with the only relief being the deferral, for mainly technical reasons, of the pain until next year. However, 2011/12 promises to see a ‘double whammy’ with yesterday’s spending reductions coming on top of whatever further cuts in spending over the next three financial years are announced by Mr Osborne in his Comprehensive Spending Review (CSR) in the autumn.” The Independent describes the cuts as marking “the end of the coalition honeymoon and a taste of bitter things to come”; the Telegraph says 50,000 jobs are “at risk” from the cuts; and The Guardian says the cuts will “hit baby bonds and students”, with children’s charities “angry” at the abolition of the child trust fund. Yesterday, Left Foot Forward outlined details of the cuts.

And the Financial Times looks at “how to cure the euro’s ills”, with the ties of the eurozone countries “being tested as never before”. The FT says the risks to the euro’s survival are political not economic: “Monetary union was always as much a political as an economic project. So it is today. If the euro is under threat, it is not from economic challenges, whether sovereign defaults or a plummeting exchange rate. The euro has successfully buttressed the single market by eliminating currency volatility and competitive devaluations. The risks to its survival are political – and even those risks can be overstated. There are powerful forces holding the eurozone together: there is no way to expel a member; political leaders are still committed to staying in; and even if they wanted to, leaving would be costly.” It concludes that: “If the eurozone cannot strike a grand bargain, countries will act in their self-interest to avoid the lethal cocktail of stagnation and belt-tightening. They will push for inflationary policies, nationally or through the common monetary policy, either way undermining the ECB’s independence. If it gives way, the euro will truly be in jeopardy. To head off such a calamitous failure is the foremost responsibility of eurozone leaders. Chancellor Merkel has warned: ‘If the euro fails, then Europe fails.’ She should have said: if Europe fails, then the euro fails.”