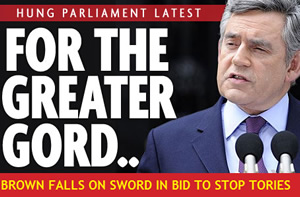 Gordon Brown fell on his sword yesterday, announcing he would resign as Labour leader by the autumn in a daring gambit to secure a progressive coalition and keep the Conservatives out of Downing Street. The Independent says his move “puts Labour back in the game”, stunning the political world and prompting the Tories to raise the stakes even higher: “the bidding war between Labour and the Conservatives for Liberal Democrat backing and the keys to No 10 took another twist late in the day when the Tories made a more generous and ‘final’ offer to Mr Clegg – a referendum on replacing the first-past-the-post system with the alternative vote (AV)… For their part Liberal Democrat MPs held a meeting in the House of Commons last night, after which a senior source said further talks on which way the party would side will resume today.”

The Guardian describes Brown’s announcement, at 5pm in Downing Street yesterday afternoon, as transforming the political landscape, setting in train “an unbridled bidding war for power”, prompting an “extraordinary Tory counter-offer” on AV: “The hurried Tory offer, previously seen as completely beyond the ideological pale for the party, was swallowed by shell-shocked Tory MPs. Cameron said he would whip a vote in parliament to ensure there was a referendum on the alternative vote, but the Tories would then be free to campaign to keep first past the post in the referendum itself.”

The anti-progressive press react in predictable loathing and incandescence, the Mail calling yesterday’s developments “A squalid day for democracy” and the Express proclaiming a “shabby stitch-up”. The Telegraph colourfully describes the Lib Dems as “behaving like ‘every harlot in history'”, saying their will be “recriminations from both sides as Nick Clegg prepares for ‘crunch time’ talks that could decide the make up of the next government”. The one Labour-supporting paper amidst the sea of blue, the Mirror, says that Brown has quit “for the greater Gord”, sacrificing his premiership in a bid to stop the Tories: “In a dramatic speech, the PM said he was quitting to pave the way for a Labour and Lib Dem pact that would wreck the Tory clamour for power. On the steps of Downing Street, he declared: ‘I have no desire to stay in my ­position longer than is needed.’ And he took the rap for Labour’s election results that ended with a hung parliament. Mr Brown said: ‘I must accept that is a ­judgment on me.’ The PM spoke as desperate Mr Cameron caved in to Lib Dem demands for electoral change in coalition talks. Gordon Brown took just eight minutes to decide to quit in a bid to stop the Tories getting the chance to ruin Britain. The PM dramatically announced he would step down in September after Lib Dem chief Nick Clegg told him he wanted to open talks about forming a coalition with Labour.”

The Independent asks whether Nick Clegg has “snatched victory from the jaws of defeat” with Brown on his way out and pr back on the table, reminding us that “the last time the Liberal party joined the Tories in a coalition the party split three ways” – as Left Foot Forward recalled yesterday. Sean O’Grady writes: “At 6.20pm yesterday, Clegg turned the historic Liberal dilemma to overwhelming tactical advantage. No doubt he was influenced by a tsunami of protest from his own grassroots, councillors and MPs about the bizarre insanity of a Lib-Con deal, and is now using his power to the best advantage for his party and, in his view at least, the national interest. With no great effort he has got Gordon Brown’s head on a stick, and showed the Conservatives that they cannot treat the Liberal Democrats lightly… The Cameron-Clegg talks reminded me of the famous David Low cartoon after the Nazi-Soviet non-aggression pact. Hitler to Stalin: ‘The scum of the earth, I believe?’ Stalin to Hitler: ‘The bloody assassin of the workers, I presume?’ Now it is Brown’s turn to call the Liberal Democrats, for the first time, by their correct title.” Also in the Indy, Steve Richards says: “Now that Brown has made his move the Lib Dems would be crazy not to take the chance it presents, rather than prop up a largely unreformed Conservative Party.”

The Times looks at the dilemma facing Ed Miliband: will he or won’t he challenge his brother? Damian Whitworth asks: “Would Ed play Cain to David’s Abel and knife his brother’s career to get his hands on the top prize? Those who know them say ‘they have a very, very close relationship’ and ‘will find a way through this’… Both young men read politics, philosophy and economics at Corpus Christi, Oxford. David earned a first while Ed had to settle for a 2:1. Both were presidents of the junior common room (JCR). A friend of David’s at Oxford recalls that he pulled off the coup of persuading the college to sever connections with Barclays Bank because of its involvement in apartheid South Africa… After Oxford, David was a Kennedy Scholar at Massachusetts Institute of Technology and ended up at the think-tank IPPR before Tony Blair brought him into Downing Street, where he became head of policy. Ed had a brief flirtation with journalism before becoming a researcher for Harriet Harman. Gordon Brown recruited him and he was a key adviser when he became Chancellor.” The Guardian, meanwhile, says of Ed: “Some see him as more approachable than his older brother” and of David: “His biggest challenges are to convince the Labour party grassroots that he will serve their needs, to prove he is more than a brainy academic and that he has popular appeal.”

And the Telegraph reports the response of the markets to yesterday’s dramatic developments, saying sterling “was under pressure” in the midst of the “political vacuum”. The report says: “The pound continued a slide that started toward the end of trading on Monday after Gordon Brown’s unexpected announcement that he will manage negotiations with the Lib Dems before standing aside as Labour leader.Within minutes of currency traders arriving at the desks on Tuesday, the pound had given up another half a cent against the dollar to trade at around $1.4780. It remains above its recent low of $1.4476, helped by the overall lift given to markets by the half-trillion euro bail-out package negotiated in Brussels.” The Times adds: “Asian markets fell this morning as the feelgood factor of the eurozone stability measures evaporated. Japan’s Nikkei index fell 1.2 per cent, or 126.22 points, to 10,404.48 amid concerns over the details of the €750 billion (£650 billion) rescue fund to prevent the Greek debt crisis spreading across Europe. Chinese inflation figures hit an 18-month high, adding to the unease. The FTSE 100 is expected to edge lower in early trading as investors consider the ramifications of prolonged political uncertainty.”