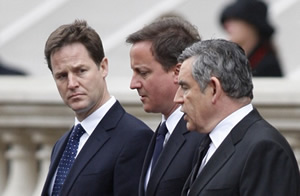 Nick Clegg kept his all his options open over the weekend, holding secret talks with Gordon Brown yesterday as negotiations with David Cameron saw the Tory leader inch his way towards Downing Street. The Telegraph reports that the two men are “close to agreeing an economic deal”, seeking to “reassure financial markets” with a plan to cut Britain’s deficit – though at the same reporting that “senior Labour figures were even said to be contemplating offering a deal to Mr Clegg that would see Mr Brown step down in return for a power-sharing deal between the two parties”.

The Times suggests it could be Thursday at the earliest that any deal is struck, a Liberal Democrat source revealing: “It’s more important to get this right than to be hasty. But we need to reach a deal before the public turns against the process.” The Guardian, however, says Clegg has set himself “24 hours to get an agreement”; the Liberal Democrat leader “has given himself until the end of tomorrow to decide whether to let David Cameron form a government, or instead risk a deal with Labour that might be seen as illegitimate by the public and jeopardise the success of a yes vote in a referendum on electoral reform… Clegg met Gordon Brown for an hour at the Foreign Office today and is understood to have set out his fear that a Lib-Lab coalition might be regarded as illegitimate even if Brown stood down as its leader.”

The Independent says dissent is growing in Lib Dem ranks as hours of meetings “end in deadlock”, with pressure increasing on Clegg “not to abandon core demands”. Cameron, who will meet with the 1922 committee tonight to secure approval from his backbenchers of any deal, is reported to have “dangled the prospect of several cabinet jobs” to the Lib Dems yesterday, though conceding that “a looser agreement is more likely”. Once again, the Indy reports that an anti-Tory coalition between Labour, the Lib Dems and others remains “a serious option”, a source revealing: “Propping up Gordon Brown would be toxic, but once he goes things become much easier. The arithmetic is very much possible.” Climate change spokesman Simon Hughes added: “Our party is very suspicious of the Tory party being able to deliver… If [a deal with the Tories] isn’t possible, then of course it is both constitutionally proper but also logical that we would then talk to the other of the three major parties, which is the Labour Party… Now, they appear more accommodating on these things. They may be more willing to be helpful.” And Lembit Opik warned: “Electoral reform is absolutely a deal breaker for any coalition – it should be a red line for Nick Clegg. The demonstration over the weekend showed the strength of feeling. Now, we have to deliver on it. Millions of hours have been spent speaking about this. The Tories now have to ask if they are in politics for themselves or for the country. It is not possible to say they have a mandate to govern alone. Nick Clegg will have to get the approval of the party to any deal. The party just won’t wear it without a serious concession on electoral reform.”

The markets are also on edge over the eurozone crisis, with the European Union agreeing a €750 billion (£650 billion) EU and IMF bailout to help shore up troubled eurozone economies. The Times reports that after 11 hours of talks, “ministers settled on the package they hoped would be big enough to prevent Greece’s debt crisis from spreading.” Under the three-year plan, “the EU Commission will make €60 billion (£52 billion) available while countries from the 16-nation eurozone would promise bilateral backing for €440 billion (£381 billion). The IMF would contribute an additional sum of at least half of the EU’s total contribution, or €250 billion (£216 billion).” The Telegraph reports that the euro “soared” in early trading this morning, as investors reacted with “relief” at the bailout plan. In a statement, the finance ministers said: “We are facing such exceptional circumstances today and the mechanism and the mechanism will stay in place as long as needed to safeguard financial stability.” Oscar Pulido, an investor at fund manager BlackRock, added: “The announcement should be good for markets at least in the short term… Last week the markets were very uncertain as to whether there was going to be any aid package provided to Greeve and some of the other Southern European Countries.” And Marco Annunziata, chief economist at Unicredit, told the FT: “This is shock and awe part two and in 3-D, with a much bigger budget and a more impressive array of special effects.”

The Guardian reports on the repercussions of the Deepwater Horizon oil spill, with activists claiming the US government “waived environmental reviews for 26 new offshore drilling projects”. The charges emerged as hopes for a quick fix to the disaster “were dashed when a build-up of crystallised gas blocked pipes in a huge metal containment box that had been built to cap the well. Engineers are now considering a ‘junk shot’, shooting a mix of debris – including shredded tires and golf balls – into the well at high pressure to clog it”. Even Center for Biological Diversity alleges that, even after the catastrophe, “the Obama administration did not tighten its oversight of offshore drilling”, an investigation revealing that since April 20, “27 new offshore drilling projects have been approved by the Mineral Management Service (MMS) the regulatory agency responsible for overseeing extraction of oil, gas and other minerals. All but one project was granted similar exemptions from environmental review as BP. Two were submitted by the UK firm, and made the same claims about oil-rig safety and the implausibility of a spill damaging the environment.” Kieran Suckling, director of the centre, said: “This oil spill has had absolutely no effect on MMS behaviour at all… It’s still business as usual which means rubber stamping oil drilling permits with no environmental review.”

And The Independent reports that nearly half of schools will boycott SATs tests, affecting up to 300,000 11-year-olds. The estimate of the amount of disruption rose at the weekend, with the number of schools backing the boycott ranging “from 30 per cent to 75 per cent from local authority to local authority”; overall, about half of the 17,000 schools due to sit the tests are set to abandon them. Christine Blower, general secretary of the National Union of Teachers said that if no agreement could be reached on reviewing the tests and scrapping exam league tables, the boycott could be repeated next year: “We would have to consider that… The purpose of the boycott is to get rid of the SATs (national curriculum tests). If we had a different series of tests and a categorical agreement there would be no league tables, then obviously that would be different.” The reports adds: “Both Labour and the Conservatives are committed to the test going ahead. However, teachers’ leaders are pinning their hopes on Liberal Democrat involvement in the new government because the party spoke out against the tests and exam league tables during the election campaign.”