George Osborne uses an interview in today's Financial Times to continue his attack on the Treasury's fiscal forecasts. The estimates are made by civil servants. 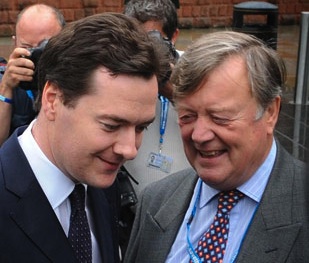 George Osborne uses an interview in today’s Financial Times to continue his attack on the Treasury’s growth and fiscal forecasts. As outlined by Left Foot Forward before the election, the estimates are made by civil servant, based on cautious assumptions, and in line with Bank of England forecasts.

In an interview in today’s Financial Times, the new Chancellor says:

At his press conference this morning, George Osborne said:

“Frankly what previous Chancellors have done is move [the fiscal and growth forecasts] around a bit to try and fit their Budget measures”.

Prior to the election, Mr Osborne made a similar remark when he told the Financial Times, “The [Budget] Red Book is largely a work of fiction”. At the time, a Treasury spokesman directed Left Foot Forward this morning to Boxes C1 and C2 of the Budget. The former is a list assumptions audited by the National Audit Office. The latter outlines how “caution” is worked into the fiscal forecast. In making its predictions about the deficit, the Treasury assumes that growth will come in lower than expected; that the gap between VAT receipts and the theoretical tax liability will rise; and that the unemployment claimant count will stay at 1.74 million and not fall back to 1 million by 2014 as projected.

A similar attack was attempted and dispatched at the time of the March Budget when David Cameron claimed the growth forecasts were “rubbish” and were not the same as the Bank of England forecasts. Giles Wilkes of the Freethinking Economist blog wrote:

“This is a terrible exageration. Go to the Bank’s projections from Feb.   You will see all sorts of ranges.  Cameron has picked the very lowest one – that which depends on market expectations of rates rising, and using the mean, not the median … We have a great deal of economic slack to absorb – which we can absorb, so long as we invest.”

“We have always been entirely clear about public spending decisions. We’re required in law to set out forecasts that take account of all decisions taken and we’ve published these in Budgets and Pre-Budgets. The suggestion that Treasury civil servants have colluded in publishing anything other than accurate figures is just plain wrong. Every new Government tries blaming the last one. This just shows the old politics is alive and well with the Lib-Con coalition.”

It is unclear whether “previous Chancellors” includes his colleague Ken Clarke.