Liberal Democrats pitch themselves as centre-left progressives. But in 18 councils they have formed governing coalitions with the Tories. 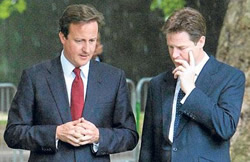 The Tories boldly claim that Cameron’s Councils demonstrate their vision for national government. If their vision is realised on May 7, a ‘no-frills’, unfair and dogma-driven government may well be the order of the day. But what if we find ourselves in the largely unchartered waters of hung parliament territory this time next week? Where can we look for an indication of how the country could be governed?

Nationally, the Liberal Democrats pitch themselves as centre-left progressives but there are 18 councils where the Liberal Democrats have formed governing coalitions with the Tories. These include Leeds, Camden and Britain’s largest council, Birmingham. These councils provide a salutary warning for what could happen if a Lib-Con coalition takes place next week.

Birmingham Council is billions in debt and accused of financial mismanagement after the Labour Leader warned of a budget crisis last year. The ruling coalition is also accused of misusing the government’s Working Neighbourhood Fund money to plug a hole in the finances which they have since denied. And while the council struggle with their debt crisis, they are cutting scrutiny of their council and spending hundreds of thousands on balloons and pens.

Tory/Lib Dem-run Leeds City Council has been demolishing successful learning centres and closing adult day care facilities – not unlike Cameron’s Councils. The council has also been accused of wasting money on consultants and mismanaging the Regeneration Department. Not quite the “fair, decent, transparent politics” that Mr Clegg has been calling for.

Nick Clegg says MPs should serve their constituents, not make a fast buck on the property market. But the Tory/Lib Dem Camden council is pursuing an aggressive policy of selling off council homes in the borough, allowing private property developers to make huge profits by ‘flipping’ or reselling them quickly onto the open market.

The smaller, but no less important, Tory/Lib Dem councils also tell a similar story to Cameron’s Councils – Carlisle has been slashing funding from community centres whilst Brent is closing community centres and hiking charges.

There are obvious inconsistencies between what Clegg is telling the electorate nationally and what his local party is doing and even this varies from constituency to constituency. If the Lib Dems are to be taken seriously, they need to find a coherent vision at a local level.

Local – and national – government by coalition is rarely easy and compromises have to be made. But it seems that local Lib Dems are all too quick to ignore the supposedly progressive agenda of their national party to join the Tories in power. We may soon find out if their national colleagues will follow their lead.