The Government today committed to spend "0.7 per cent of gross national income in development aid from 2013" in the Queen's speech. 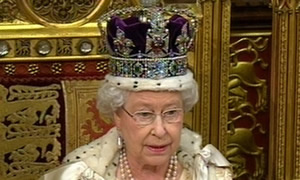 The Government today stuck by the Tory manifesto and Coalition agreement pledge to ring-fence international development spending, committing to spend “0.7 per cent of gross national income in development aid from 2013” in the Queen’s speech.

“The Coalition asserts that meeting the UN target of allocating 0.7 per cent of developed country GNI to development aid by 2013 is ‘morally right and in the national interest’. However, it insists that independent evaluation will be used to ensure that Britain’s aid efforts are effective.“

In an open letter to the Government, chair of the Labour Campaign for International Development David Taylor wrote:

“We are concerned about the make-up of this spending commitment… If the coalition were to meet their promised ODA increases through an accountancy trick then Britain will not have kept her promise to the world’s poorest people. Double-counting cannot be equated to a material increase.”

“The reason this concerns us is that any significant decrease in the proportion of ODA that is controlled and spent by the Department for International Development would result in a watering down of the poverty reduction focus that has been so successful in recent years.

“Conservative estimates suggest that DFID’s work has helped place 40 million more children in school, lifted 3 million people per year out of extreme poverty and contributed substantially to the expansion in coverage of vital HIV/AIDS drugs.

“Therefore, will you please confirm that the amount of ODA spent though DFID will remain at the current proportion of 88%?”

Elsewhere, today’s Guardian reports calls from campaigners to expel Italy from the G7 following its “spectacular failure” to honour promises made at the Gleneagles summit five years ago. A report by One, the aid charity led by Bono and Bob Geldof, shows that, far from increasing spending on international development, Italy has actually reduced financial assistance to the world’s poorest countries.

In 2005, the world’s leading industrialised nations pledged to double aid to Africa to $50 billion (£34.6bn) a year; on current projections only 61 per cent of the extra money will be received. The report reveals:

“Britain would come up with 93% of what it promised, Canada and Japan would both comfortably exceed their modest pledges, and the US would boost aid by more than 150%. But Germany and France were both on course to increase assistance by only 25% each, while Italy’s aid budget would be 6% lower in 2010 than in 2005.”

The charity’s executive director Jamie Drummond was scathing in his criticism of Italy, saying:

“Italy’s leaders can’t be allowed to infect the G7 any longer. They need to be kicked out. The real challenge with judging the G7’s promises to Africa is that the awful inaction of governments like Italy’s clouds the commendable performances of the UK or the US.

“This suggests the need for a renewed coalition of the willing, where only those seriously committed to partnering with the African people are brought together, along with emerging powers, new technologies and Africa’s own rising generation of activists and entrepreneurs.”

By contrast, Bono praised Britain and the US for their delivery:

“The UK’s bipartisan commitment to development, and near fulfilment of its promise, stand out as achievements in these hard times, as does President Obama’s promise to increase aid over and above the levels President Bush promised and delivered.”

Left Foot Forward will have more on the Queen’s speech over the coming days.