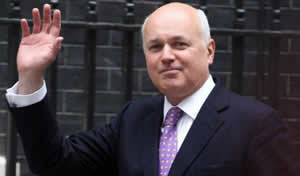 Ian Duncan Smith’s first speech as work and pensions secretary, delivered this morning, was an impassioned call to eradicate poverty, primarily by improving work incentives. This takes forward Mr Duncan Smith’s previous work at the Centre for Social Justice on reducing marginal tax rates and simplifying the benefits system to make it absolutely clear that people will be better off in work.

His speech also developed the Coalition Government’s plans to replace existing welfare to work programmes with a single ‘Work Programme’. He is right that the benefits system is too complex; that marginal tax rates (although reduced by the previous government) are still too high for some; and that a single welfare to work programme could be better at delivering more tailored employment support.

However, in focusing exclusively on benefit reform and changes to welfare to work, his speech completely ignored the economic reality that many workless people face every day. In many parts of the country, the jobs simply are not there, and if they are, they are too often low-paid, low-skilled, short-term, not particularly rewarding and lacking progression opportunities.

Only talking about benefits, work incentives and employment support assumes that the problem lies only with the people who are out of work. This certainly isn’t true now, when soaring unemployment rates are clearly due to recession; but it is unlikely to offer a full explanation for the high levels of worklessness that plagued parts of the UK before the recession.

There is plenty of research to suggest that the decision to take on work is shaped by the opportunities people see in their local area, as well as their qualifications and aspirations or the knowledge they will financially better off. There is much that government could do, in partnership with others, to improve the availability of decently paid, rewarding jobs in deprived communities, but this was completely lacking from Mr Duncan Smith’s speech.

The Coalition Government is claiming its plans amount to a radical programme for welfare reform. In truth, they are largely a continuation of many of Labour’s reforms – but with one important exception. When the recession hit, the Labour government moved quickly to adapt its thinking and instead of keeping all its eggs in the basket of welfare and benefit reform, it invented the Future Jobs Fund – the first attempt in recent years to guarantee that real jobs would be available.

This was a truly radical approach to tackling worklessness. But the Coalition has cancelled any further job creation under the Future Jobs Fund, in the name of efficiency savings. This suggests that Duncan Smith is returning to a pre-recession fixation with benefit reform and welfare to work, with little consideration of what is actually happening in the labour market.

It is heartening to see a Conservative work and pensions secretary with so much genuine passion for tackling poverty and improving the life chances of people who so often get left behind; but unless he learns the lessons of the last decade of welfare reform, Mr Duncan Smith risks creating an increasingly punitive system that doesn’t reflect people’s real experiences and is therefore not capable of providing them with all the support they need to escape poverty.