Ed Miliband outlined today that he would make the introduction of a nationwide living wage “central to his campaign”. He said the living wage “empowered the powerless". 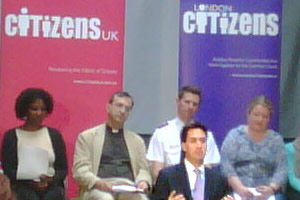 To a packed room in the LSE students’ union this morning, Ed Miliband outlined that he would make the introduction of a nationwide living wage “central to his campaign”. He said the living wage “empowered the powerless and made it possible for them to get decency in the work place”.

The Labour leadership candidate recounted how a chance meeting with a cleaner in Whitehall earning less than the living wage was a motivating force for Labour’s manifesto commitment, which he wrote:

“To underline our commitment to helping the lowest paid we will ask all Whitehall Departments, within their allocated budgets, to follow the lead of those who already pay the Living Wage.”

Mr Miliband said it was unfair that managers earned six figure salaries in the civil service while their security guards earned less than the living wage. He said “Companies earning big profits can afford to pay the living wage” and outlined that he would be putting pressure on councils to introduce the living wage.

He also spoke about Labour party reform. Echoing comments made other leadership candidates including his brother, David, and shadow education secretary Ed Balls, he said he wanted the Labour party to become a movement:

The event was introduced by LSE students’ union education and welfare officer, Emanuel Akpan-Inwang who said that the living wage was a personal as well as a moral issue for him as someone who’s mother had struggled with low wages as a cleaner during the 1980s. Professor Jane Wills of Queen Mary University said the living wage was “ethical, responsible, and can save money”.

7 Responses to “Ed Miliband: living wage to be “central to his campaign””