Conservative opponents of electoral reform have had to re-package their argument slightly. 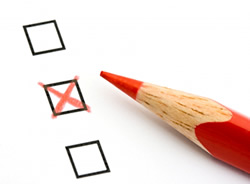 The stock Conservative argument in favour of ‘first-past-the-post’ (FPTP) is that it is the only system which produces clear and decisive electoral outcomes, thereby avoiding the need for parties to ‘haggle’ post-election; with FPTP producing precisely a situation in which the party leaders are forced to negotiate (in the way many voters would appear to like them to), Conservative opponents of electoral reform have had to re-package their argument slightly.

Over on Conservative Home, we are told by Jonathan Isaby that “we are currently witnessing the best advert against changing the electoral system”. Unfortunately, to make this new version of the argument work requires a re-writing of British political history. In Isaby’s view the current situation is “unprecedented” and “very much the exception to the rule”.

He goes on to claim that:

“First Past The Post has in the main always delivered a decisive result, with a Prime Minister re-appointed or turfed out within hours of the votes being counted.“

Even if we take a generous view, this claim only stands up if we take ‘always’ to represent 1945-2009. Even then, Isaby is skating on thin ice. The elections of February 1974 failed to produce a decisive result, as is well known. Moreover, wafer-thin majorities were returned for the Conservatives in 1950, and for Labour in 1964 and in October 1974. Fresh elections were called in 1951 and 1966, but were not an option after October 1974. The 20-seat majority which the Conservatives secured in 1992 was not sufficient to prevent John Major being held to ransom in Parliament by Euro-sceptics within his party, and had anyway disappeared by early 1997.

If we take ‘always’ to extend a little further back in history, then the picture is even more complex. Four elections in the early twentieth century failed to return a majority government – January 1910, December 1910, December 1923 and May 1929. There would almost certainly have been more, but for the formation of the National Government in 1931 and the outbreak of war in 1939. From 1910-1945, minority governments and coalitions were the norm, involving a great deal of inter-party negotiation. In short, the current situation is far from ‘unprecedented’.

The experience of the inter-war years tells us something of enormous importance. FPTP only delivers clear outcomes in a two-party system (and even then it is far from guaranteed). It was the emergence of Labour in the first half of the twentieth century which made ‘hung Parliaments’ commonplace (although nobody called them that at the time).

The re-emergence of the Liberals is now producing a similar effect in the early twenty-first century. From 1945-70, both Labour and the Conservatives could usually command at least 45 per cent of the vote. Neither party has been able to do so since 1974. Unless one of the three main parties is reduced to a rump, as the Liberals were in the immediate post-war years, then we are facing the prospect not only of general elections producing ‘hung Parliaments’ on a regular basis, but also of them producing seriously disproportional results. This is surely the worst of both worlds.

But disproportionality is not one of Isasby’s concerns. Instead, he goes on to argue that “proponents of proportional representation actually want to institutionalise the very confusion and chaos which we are currently witnessing”. His horror scenario is that electoral reform enabling “a small party to hold disproportionate sway – permanently, after every general election – as to which is the majority partner in the coalition government”.

We have to assume that, when Isaby says “a smaller party”, he does not mean the DUP – with whom Cameron would have preferred to do a deal, had the numbers added up. So this must mean he is referring to the Liberal Democrats – whose 6.8 million votes come in at two-thirds of the Conservatives’ total and four-fifths of Labour’s. By European standards, this is a very odd definition of a ‘small party’, which would normally be one with around 5-10 per cent of the votes cast.

If Isaby’s knowledge of British political history is a bit shaky, the same applies to his grasp on European politics. He suggests that PR would “give almost perpetual power to that smaller party, as has been the case for the German FDP over the decades”. The Germany example is only true for the period until 1997; the FDP were out of power for 12 years from 1997 and have only just returned to government as a junior coalition partner following last year’s national elections.

Conservative opposition to PR is rooted in their fear that left-of-centre electoral reformers will be proved right, and it will tip the balance towards centre-left government in the UK, locking the Tories out of power for a generation or perhaps for longer. The current Lib-Con negotiations suggest this need not be the case, as does the experience in Germany and elsewhere.