Mr Cameron has to dampen the EU fervour of the Lib Dems and dampen the rampant scepticism of the dinosaurs in his party, meaning weak pragmatism rules. 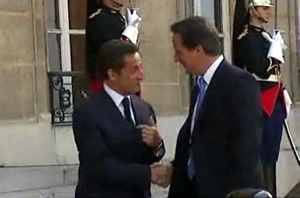 A little more than half a page of the Coalition Programme for Government deals with Britain’s relations with the European Union and, like much of the rest of the coalition deal, the EU policy combines soothing words and a mixture of Conservative and Lib Dem policy commitments.

Brussels, for a brief fortnight, enthused about the prospect of strong Lib Dem representation at Europe’s top table when Clegg excelled in the leadership debates, and will be content with the smooth language that softens the edge of Tory Euroscepticism, talking of Britain being a “positive participant in the European Union, playing a strong and positive role with our partners”.

After the positive introduction come essentially Conservative paragraphs about avoiding ceding powers to Brussels and the need for a referendum about any new transfer of powers. After the debacle of the Treaty of Lisbon there’s little or no prospect of a new treaty in the next five years anyway.

The commitment to not join, or attempt to join the euro has drawn some comment, especially in light of Cameron’s meeting with Sarkozy. But with Europe in the throes of the Greek debt crisis could even the most ardent Europhile possibly advocate entry into the Euro at this stage?

The other proposals – to defend the UK’s interests in budget negotiations (yet without a serious commitment to cut agriculture spending), and to approach justice and home affairs matters on a case by case business are little different from Labour’s approach when it was in government. Yet if there is no clear difference in terms of policy outcomes, will there be any difference in terms of leadership and engagement of ministers in Brussels?

Gordon Brown never managed to shed his reputation from his time as Chancellor – reading papers while others were speaking and not playing corridor diplomacy effectively. Cameron may manage the latter with greater aplomb but with the Tory MEPs outside the European People’s Party it will take some time for the government to overcome other leaders’ suspicions.

Certainly the chances of UK leadership in Europe, as advocated by Simon Jenkins in The Guardian, are very, very slim. Cameron has to dampen the EU fervour of the Lib Dems and dampen the rampant scepticism of the dinosaurs in his party, meaning that weak pragmatism is the best we will see from the government’s EU policy.

Jon Worth has a background in EU policy work and communications and is based in Brussels and London. He writes one of the longest running blogs about Britain’s relations with the EU; follow him on Twitter: @jonworth