The prime minister has a moral and political conviction the like of which we haven’t quite seen from him in this campaign. He has three days to make it count. 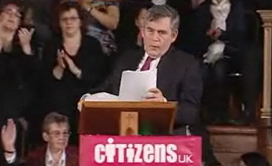 Our guest writer is Anthony Painter, who blogs at www.anthonypainter.co.uk

The objective for Citizens UK – the national umbrella for citizens’ community organising movements such as London Citizens – was simple. They intended to ratify, via a formal vote, a general election manifesto and then get the three main party leaders to agree on the six policies within it. Everything was done democratically from the election of the platform panel to agreeing the manifesto itself.

Citizens UK, ‘we, the people’, called on the next Government to:

• Recognise civil society and agree to an annual meeting with Citizens UK.

• Adopt the living wage in the public sector and champion it across the country.

• Create a 20% interest rate cap on all unsecured money loans and bring access to affordable credit to local communities.

• End the detention of children in immigration centres.

David Cameron’s speech was high on ‘big society’ rhetoric but fairly flat until he got onto the meat of the Citizens UK manifesto. His best line was his conviction that he would fight the cynics who say “it’s just me and the Government, not we and the community”. On the pledges he got a 4 out of 6.

He gave half commitments on the living wage (a commission to look at pay inequality in the public sector) and promised to look at detention of children in asylum centres. He refused to countenance a one-off, conditional amnesty for irregular immigrants – bizarrely sticking to a ‘they encourage illegal immigration’ line.

His performance at the questions and answers was warmly received and his argument that credit unions needed to be developed and established before you cap interest rates otherwise you push people into the arms of unscrupulous doorstep lenders was well made.

Nick Clegg was exciting delegates even before he had spoken. His speech was much more powerful than David Cameron’s. His constant equation of liberalism and fairness was consistent and clear. He was able to agree to 5 of the 6 policy demands – he used his policy of increasing of the personal tax allowance to £10,000 and extension of minimum wages to young workers as a defensive block against introducing the living wage.

And on immigration he was absolutely clear that his party’s policy of introducing a ten year one-off amnesty was about fairness – only ‘evil criminals’ who prey on vulnerable illegal immigrants had anything to fear.

But it was Gordon Brown who soared in this environment. He was enthusiastically received from the off. The audience sensed an authenticity and passion in his speech. There was real conviction. Community organising is about testimony and the prime minister gave testimony as a ‘son of the manse.’

His flourishing rhetoric read the mood of exaltation in the room to perfection. His peroration was powerful. The speech had some truly inspirational moments; “if you fight for fairness, you have a friend, a partner and a brother in me,” Brown said.

He finished with an imploration:

And despite the fact that he only agreed to 3.5 out of 5 items in the Citizens UK manifesto (he wasn’t asked about the immigration amnesty), he left to a standing ovation from most and enthusiastic applause from the remainder.

On the evidence of this remarkable afternoon, civil society is vibrant, messy, optimistic, powerful, brilliantly organised and inspirational. And the prime minister has a moral and political conviction the like of which we haven’t quite seen from him in this campaign. He has less than three days to make it count.

Political Scrapbook has the video.